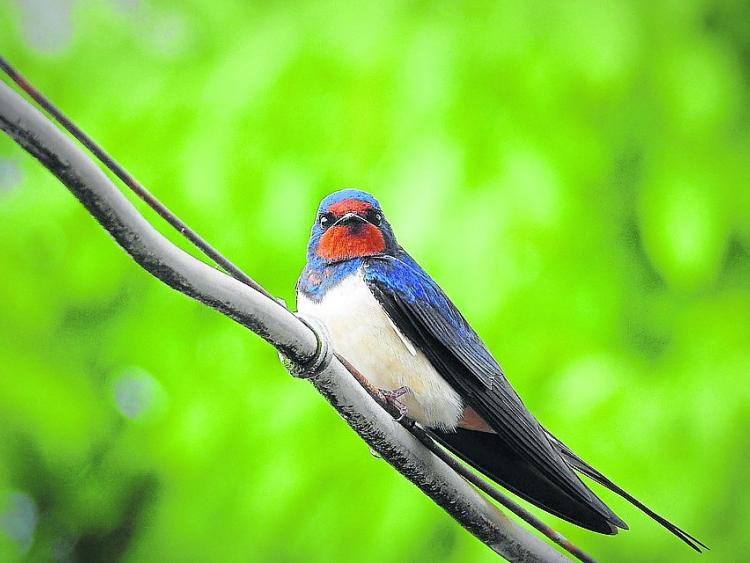 The swallows are finished training, and the first month of Autumn has passed.

From dawn until dusk, every day, the last clutch came out; first remaining in the perimeter of the garden, circling and circling, and then as they became more sure, more muscular, and more energetic they explored further and further until soon they went out of sight entirely, only returning to roost.

This reminds one of how quickly the year has passed.

For several weeks now, we have them returning every night to roost on the rafters in the woodshed. I often watch them - from a distance - take their places.

It’s not hard to know where they sleep. They leave indelible marks!

This year the swallows hatched at least twice, if not a third time in some cases.

During the hatching time, our cat goes out to try and catch the foraging parents, and the swallows dive at her repeatedly until the cat has crouched down almost out of sight.

She hides alongside the lawn, where the coving allows some shelter, or else tucked up against the wall.

This goes on every day, Dinky enjoys it.

It never fails to fascinate me watching the mother and father swallows beavering away, carrying food alternately almost all day, for a number of days, as soon as the brood hatch out.

At these times there are many broken spent eggshells in the shed.

In this frantic period the young swallow grows beyond imagination, and soon they are on the wing, flying in circles, busy practicing.

One can notice their increase in size over this period, as they fly ever farther from base.

It’s difficult to comprehend how they manage to fly all of three thousand miles to the sunnier climes.

It really is one of the marvels of nature, still remaining a mystery to know how they plot the route.

Is it instinct, or some other way that only the swallow is aware of?

Such a tiny bird.

Next year, once again, they will find their way back to this address, and build once again in the shed that has only been here three years. Those who come will be direct relatives of the surviving broods of this year.

Their intelligence knows no bounds. In the shed, there are two electric doors, and once they are closed, the only way for the swallows to get in is in a tiny space next to the roof.

We left it there deliberately, less than the size of a man’s hand.

Once the doors are closed, the swallows switch straight away to going in and out in the roof apex.

The swallows travel at full speed, unerringly, effortlessly swooping with precision in and out of the shed.

Such grace, and accuracy to fit into so small a space without faltering. One of the many wonders of the swallow.