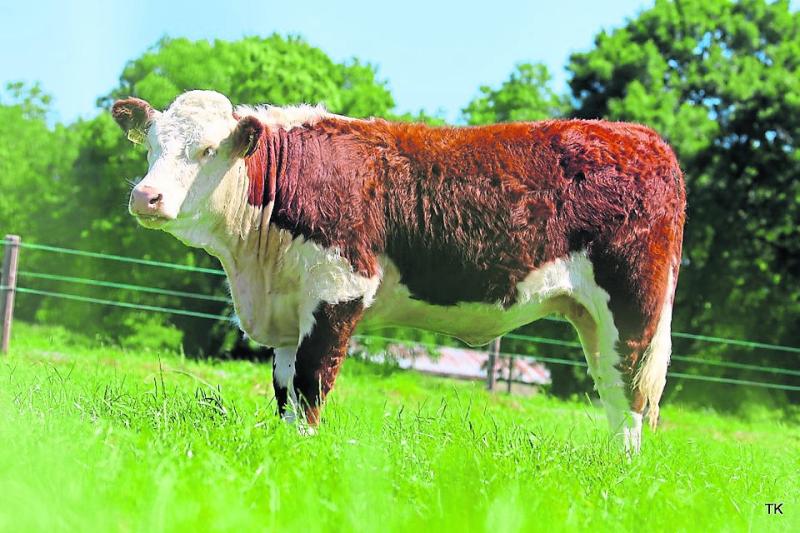 Three of the country’s top pedigree Hereford herds have joined forces for what has been dubbed an ‘Elite Genetics Production sale’.

The sale will see the cream of the crop of pedigree Hereford cattle put on the market, with 30 heifers in total to be offered to prospective buyers. This opportunity will benefit all Hereford breeders alike; opening doors for all breeders and giving buyers a chance to make quality investments.

Organisers said: “When choosing stock, we look for shape, style, colour and the pedigree has a big impact. We place great emphasis on cow families and bloodlines.
“We also look at the animal that is standing in front of us. We use stars as a tool or a guide, but it’s the animal first.”

All cattle entered in the sale, which takes place in Tullamore mart on Saturday, August 31, come from three pioneer Hereford herds dispersed throughout the country. The herds are: Balleen Herefords, Corlismore Herefords and Longford’s Trillick Herefords, which are owned by farmer JJ Farrell.

Managed by the Farrell family, Co Longford, the Trillick Herd has a long-standing association with pedigree Hereford cattle. The herd was first established in 1946 by James Farrell, before being taken over by Patrick Farrell and now JJ, his wife and three children.

Several of the foundational females of JJ’s herd carried lines from the renowned Lugboy herd, owned by the late Mick Campbell, Strokestown, Co. Roscommon.
To grow the herd, JJ & co acquired cows from the prize-winning Killoe herd of the late Peter Hagan and today, the Farrell’s farm is home to thirty pedigree registered breeding females and a dairy herd.

The Trillick Herd have sourced high-quality bulls from several countries including the U.K and Australia. The utilisation of the best available genetics and a selective breeding policy are responsible for the herd’s phenomenal success in the show & sales rings, and on the AI market.

The upcoming sale kicks off at 3pm and Longford farmer JJ says this is a rare opportunity for farmers looking to make a start at suckling or to improve their herd's genetic profile.

"There will be ten heifers from each herd, thirty altogether," JJ told the Leader.

"It is the first time these three herds are holding a sale together.

"We are putting up the best of what we have."

JJ says this sale is the result of a lifetime of breeding between the farmers and confirmed to the Leader that all ten of his heifers are in calf to a top performing English Hereford bull.

He said: "Of the ten heifers I am selling, they are all in-calf to an English bull."

One of the heifers to be sold by JJ in Tullamore on September 1 is a full sister to Trillick Jake, which JJ sold at the recent Nenagh Spring show and sale for an impressive €3,200.

The heifer in question, like Trillick Jake, was sired by ‘Free Town Hotspur’ and bred out of ‘Cloughran Sally.

Catalogue of all entries in the sale is available through the official Hereford society website, https://irishhereford.com/.

You can get further information on the sale and see pictures of some of the other stock on offer, via the official Facebook page - Elite Genetics Production Sale.