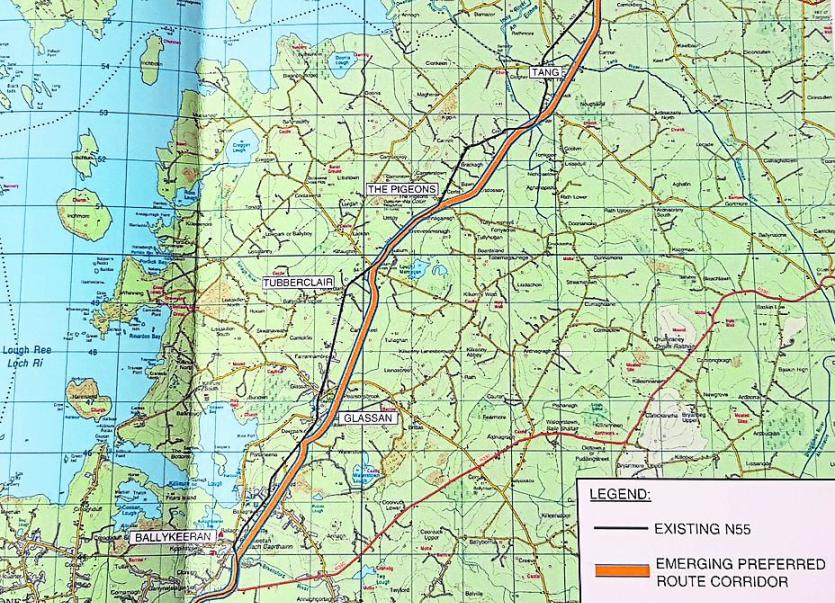 The communities that live along th Emerging Preferred Route Corridor (EPRC) for the N55 from Athlone to Ballymahon as well as the N55 Steering Committee have expressed concern that the chosen route is not in the best interests of the people.

The new route was revealed last month and the realigned and upgraded N55 will by-pass the villages of Ballykeeran, Glasson, Tubberclair and Tang while also incorporating some of the existing route.

It is understood that the time frame for the project is between eight and thirteen years.

Officials and the project design team suggest the EPRC will affect the least amount of people.

In a statement on the chosen route, the N55 Steering Group said, “The new EPRC which has been selected by Westmeath County Council is a new 150 wide corridor, running parallel to the existing N55 and in some cases it is no more than 200 metres from the existing N55, through populated areas, Heritage sites and areas of Special conservation.

“This route has been selected without providing any report outlying the reasons why the route was selected and why other routes have been omitted from the process. According to best practices the Route Selection Report should have been finalised when the EPRC was selected which is now over six weeks ago.”

It is the N55 Steering Group's opinion that the route selected is at odds with Westmeath County Council's own development plan and the Landscape Character Assessment, as the selected route is located within the scenic Character Area 6 of Lough Ree/Shannon Corridor and Lough Ree which is a Special Area of Conservation and therefore has significant environmental implications that should have been considered in the route selection process.

“The public living along the EPRC feel that the Route Selection process has been anything but transparent and are calling on elected representatives to urge the council to publish the Route Selection Report so that it can be independently reviewed before the authorities proceed with the next phase of the project,” the statement continued.

“The N55 Steering Committee will provide support to the local communities impacted by the (so-called) Emerging Preferred Route Corridor, by establishing facts, ensuring that Westmeath County Council and Transport Infrastructure Ireland (TII) adhere to all National Legislation and European Directives so that the Local community interests, our Heritage, Environment and Biodiversity are protected.”

Anyone  interested in joining the N55 Steering Group to ensure the best route for the N55 realignment project has been selected then please contact the group at n55steeringgroup@gmail .com or make contact via the  Facebook page, @N55Routes.