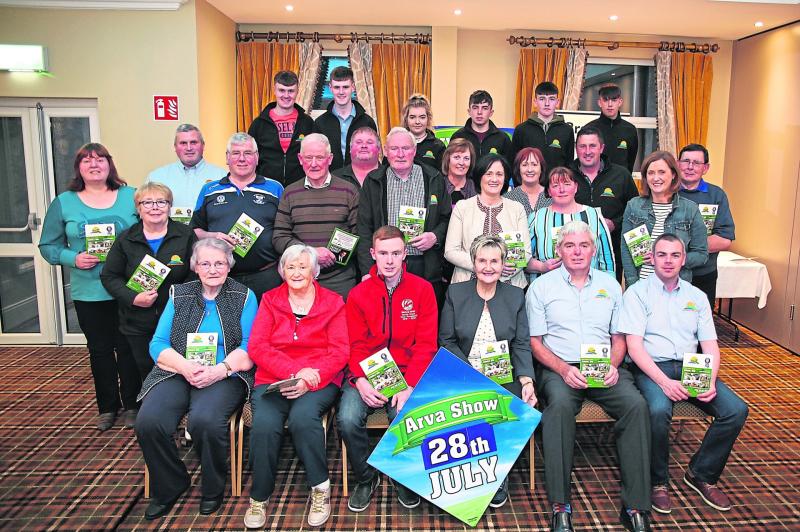 Stepping in to replace Macra na Feirme president, Thomas Duffy, as guest speaker on the night was Carrigallen native, Fergus O’Rourke, who was recently elected vice president of the North West Macra region.

“It went well, there was a great crowd there,” Brían Cully, show society secretary told the Leader.

“We were supposed to have Macra President, Thomas Duffy, as guest speaker, but he had to cancel at the last minute. So, we had Fergus O’Rourke from Carrigallen instead.

This year’s Arva agricultural show takes place on Sunday, July 28, kicking off bright and early on the showgrounds in Arva, Eircode - H12 PW54. The latest instalment is expected to be the biggest and best to date, providing the weather holds up.
Brían Cully explained: “It is all very weather dependant.

This year’s show will feature the usual array of competitive classes, with well in excess of 100 classes and 15 national qualifiers. The show committee say entries are coming in thick and fast, with competitors set to make their way from throughout the country.

“We have the same classes that we would have had every other year, but we have a good few qualifiers as well.

“I think it was last year, there was a man who came the whole way from Cork for one of the qualifier classes. Where we are, we would have a good reach within the three counties around us.

“We will have people coming from Mayo, Kildare, Sligo and all over,” he added.

One change to the show format this year relates to prize monies on offer. In a bid to further increase interest, the committee have added to the overall prize money.

“We increased the prize money in some of the animal and livestock classes, so the prize fund is now over €20,000,” Brían remarked.

“Entries are coming in steady enough at the minute. Entries closed Monday, but we always give a day or two grace period,” he added.

Judging for cattle classes will commence from 12:30pm on the day, with 35 Pedigree classes in total, featuring breeds such as Hereford, Aberdeen Angus, Belgian Blue, Friesian, Charolais and Limousin.

Limousin breeders can also take part in the Limousin Champion of Champions Qualifiers, with entry fee set at €10 per animal to enter. Meanwhile, there will be ten classes for those showing non-pedigree stock.

There will be a total of 14 sheep classes at this year’s annual event, featuring pedigree Suffolk, Charollais and Texel breeds. For those keeping goats, there will be three competitive classes on the day.

Meanwhile, a Juvenile competition will also take place and is open to all schools and children aged 14 years of age or younger.

This competition also includes two rather unusual classes, featuring none other than Lego and awarding entries for the best Lego creation!

Brían explained: “There is a few new classes in the Juvenile section, such as the two Lego classes.

“I saw it on another show schedule, so we took the idea from there.” he laughed.

One other class which is set to be brought back again this year due to popular demand is the best dressed animal class. Last year’s winner was chosen as a lamb with a licence to kill, i.e it was dressed up as James Bond

“Last year was the first time we had the best dressed animal class,” said Brían.

“We are hoping to get more entries into that this year.”

Although primarily focused on Agriculture, organisers have promised that the event this year will have something for people of all ages, backgrounds and interests.

Will you be there on Sunday, July 28? It promises to be a first ‘class’ occasion for all involved.