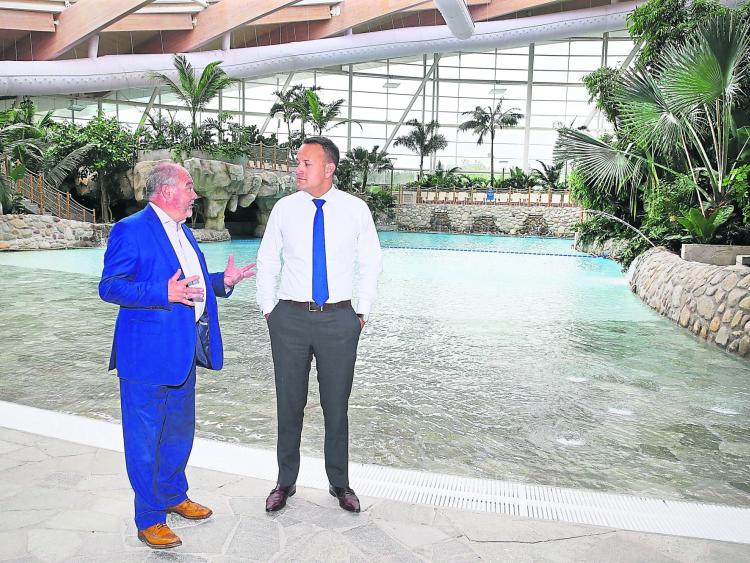 An Taoiseach Leo Varadkar, TD, is pictured at poolside with Martin Dalby, CEO of Center Parcs to mark the completion of the landmark €233 million Center Parcs Longford Forest resort on Friday last

Any of us who are not afraid to declare our devotion to the Catholic Church, were shocked by the comments offered up by Mr Varadkar in his sneering comment to Micheál Martin.

I for one was very disappointed to hear the leader of our country expressing himself so carelessly, despite the fact that in his outburst he revealed his real thinking for all to hear.

As Gene Kerrigan wrote in the Sunday Independent, “Varadkar ended up appearing to be precisely what he is - crass, superficial and inept.”

Having recently been attending the LGBT Pride parade, one would assume that he must have a tolerant attitude to the beliefs of others.

It’s disappointing to see that he is not at all tolerant, and is prone to making up his mind on a whim.

The job of An Taoiseach is an onerous task. Some would say its thankless, others would say it’s easy.
Well, it’s not easy; that’s for sure.

The leader of Ireland must always be mindful of showing respect to the office, when speaking, and be careful not to become offensive, or hurt any Irish citizens unduly.

The Taoiseach must be respected, but in saying that, a person who is in a position of leadership has to be mindful of respecting others.

This is not always easy, but is a necessary part of carrying out the responsibility with grace and restraint.

An Taoiseach is after all our most visible statesman, so he should act like one.

Leo Varadkar failed in this most basic requirement.

Personally, I found what he said quite outrageous coming out of the lips of the country’s leader.

It was amazing that Catholic priests didn’t speak out more forcibly.

Not the Catholic Hierarchy, who were personally, and deliberately responsible for allowing terrible deeds to be covered up, but developed intelligence means separating those who covered up abuse, from the good people who are all down the chain of authority, church-wise. Great priests abound all over Ireland.

I’ve never heard any Taoiseach, ever, becoming a sort of street fighting boot boy out of anger.

In any case, I don’t believe that Mr Varadkar was angry. He had a sneer on his face, as he made the remark.

Since he obviously needs to find examples of how to behave, he should check out the hallmark of Taoisigh of every party, over the years, irrespective of how robust exchanges became in the Dail.

From Jack Lynch, Liam Cosgrave, Charlie Haughey, Garret Fitzgerald, John Bruton, Bertie Ahern, Brian Cowen, Enda Kenny.....none of them could ever be accused of unparliamentary language in the real meaning of the term, irrespective of what one might think of them in other ways.

For most of the Irish population - I would assert - to hear Leo Varadkar being smart and snide, in the Dáil, beyond the bounds of propriety was very disappointing.

This includes Fine Gael people.....the vast majority of whom I suspect were, and remain, horrified.
Of course the Dublin media dismiss what he said as being irrelevant, and as always, the loudest are usually in the minority.