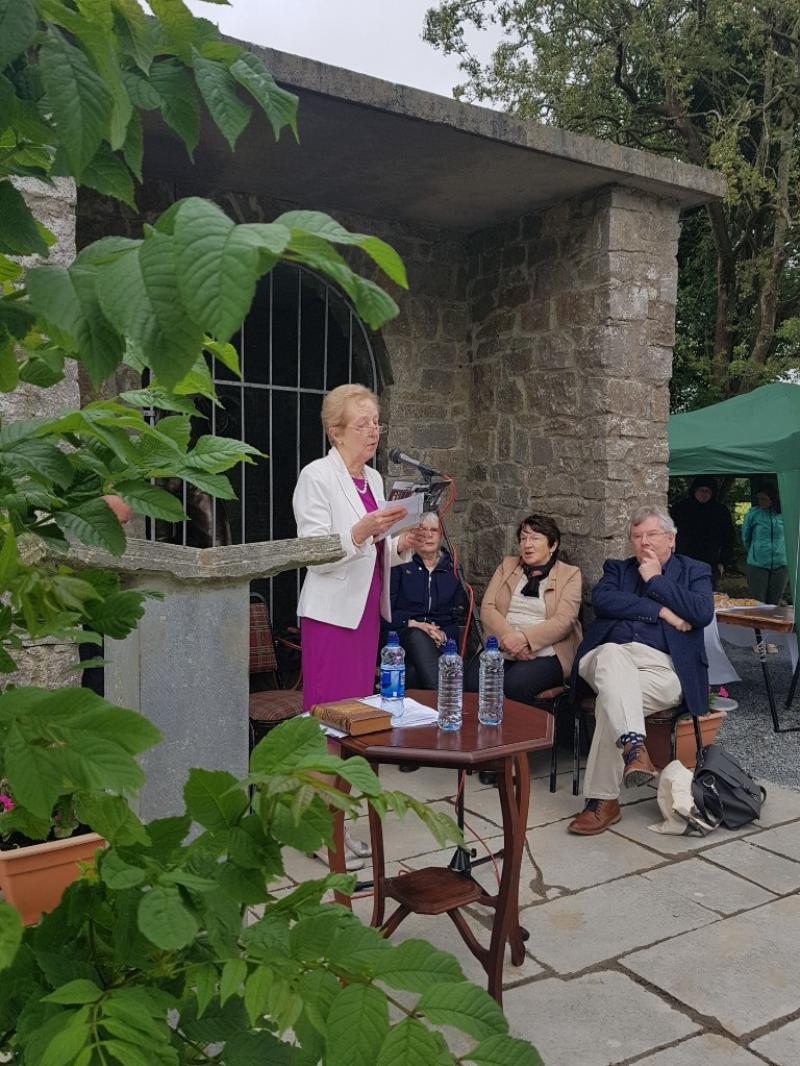 Margaret Nohilly, together with her husband, Tom, has been a well-known resident of Lanesboro for many years.

A retired primary teacher, Margaret’s abiding passion is poetry. She has been writing since the spark was lit, on joining the newly formed Lasrai Writers’ Group in 1995.

A collection of her early work was published by Lapwing, Belfast in 2009.

Since her retirement, Margaret has been working on a second collection of poems.

Her work has been published in several well-established poetry journals, most recently, Poetry Ireland Review, currently edited by Eavan Boland.

In September 2018, her poem Joy of Books was the winner of the Inaugural Padraic Colum Poetry Competition.

She was thrilled to be awarded first prize also, in the 2019 Goldsmith International Literary Festival Poetry Competition, earlier this month in Pallas. The poem is entitled Bona Fide. Both of her other poem entries were highly commended.

Noel Monahan, adjudicator of both competitions described Margaret’s writing as most effective, with all the right words in all the right places, the work of an experienced writer who knows how to craft the poem.

He declared her work to be of the highest standard, of national importance and deserving of a wider audience.

Just the little size of her,
not more than four or five:
scraggy, short brown hair,
mirth in her eyes;
ensconced in floral cushions
in a lattice window seat.

A glare from settled snow
illuminates the page she bores in,
propped on drawn-up knees,
more books strewn round her feet;
oblivious to sounds within the house,
or skirmishes outside.

How privileged this little girl,
to know such transport, and so young;
yet deprivation might as likely
spark a hunger for enlightenment,
escape, even a single book,
good-fortune-come-upon, could spur.

Though not a natural reader as a child,
I’d languish without books, my daily
food; and poetry my element, I space
my raid on novels: engagement
with new characters less urgent
than to linger over words.

According to the legend - Colmcille,
voice choked with guilt, the hidden script a halter,
sought to defend his stealth with ink and quill,
the sacred text of Abbot Finian’s Psalter.

What blame for him, who under Finian’s skill,
caught fire of God as thirst for living water?
His ill-judged enterprise set will to will,
till Diarmaid deemed the copy: Mother’s daughter.

In exile, beyond books, his heart aflame,
to Iona, Colmcille bequeathed his name.

You’d have to sympathise with Colmcille,
especially when you eye your crowded shelves;
without enduring hours of cramp and chill,
we’re swamped with books not scripted by ourselves.

I’ve done it in a small way, haven’t you
- swiped lines you loved from cherished books on loan;
assimilated thought that’s somehow new,
not claimed its wisdom, beauty as your own

It’s tempting to dismiss these feuding monks,
bound to the word, without which none can thrive;
confined by limitations we can’t count,
no more immune than we to envy, pride

Today, proliferation is our bane,
yet only words that smite the heart remain.