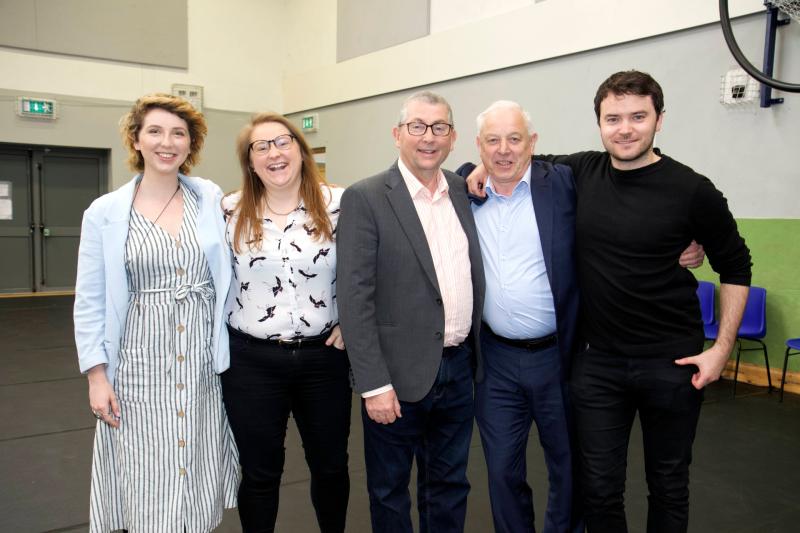 Mick Cahill and his daughters, Una and Siona, with Pat O'Toole and his son Ronan

It was late last Tuesday night when the marathon election count for Longford finally came to an end following the election of Cllrs Mick Cahill, Colm Murray, Pat O'Toole and Gerard Farrell.

Count staff, election candidates, their families, supporters and local press all gathered in the superbly-equipped St Mary's Community Campus in Edgeworthstown on the previous Saturday for what was to be a long, drawn-out count with delays caused by travelling ballot boxes and a recount in Ballymahon MD.

And, while Longford MD and Granard MD were all done and dusted by Monday night - or, more specifically, 5am Tuesday morning - Ballymahon MD was to wait another day for its remaining four seats to finally be filled, after Independent candidate Tony Moran called for a recount following his elimination.

Cllrs Paul Ross (FG) and Mark Casey (Ind) had already been elected to Ballymahon by 7pm on Monday night.

Mr Moran was eliminated on the fifth count on Monday night when his total number of votes, including transfers from previous counts, amounted to 448.

This number was identical to that of Newtowncashel's John Kenny (FF) but, with Tony Moran receiving 325 first preference votes in comparison to Kenny's 419, Longford returning officer Nora O'Farrell eliminated him and adjourned the Ballymahon count until 11.30am on Tuesday.

It was approximately 8pm on Tuesday when the count caught up again, with Tony Moran once more being eliminated.

In the next count, Mick Cahill (FF) had exceeded the quota and claimed the third Ballymahon. He was the last councillor to be elected by reaching the quota.

His election was followed immediately by the election of Colm Murray (FG), Pat O'Toole (FF) and Gerard Farrell (FG), all of whom were elected without reaching the quota.

Following his election, Cllr Mick Cahill said that he was “honoured” to be re-elected by the people of Ballymahon Local Electoral Area.

“I'm delighted to have the opportunity to serve the people of this area in driving continued economic and social development for south county Longford,” he said.

“It is one of the greatest privileges of my life to ensure that the people of our area are well-represented and I will continue to work hard on your behalf with the communities, parishes and all households big and small who face challenges, to ensure we always strive for better.”

“Elated” was the word Cllr Colm Murray used to describe how he felt to be re-elected last week. And, he said, it's great to be working with the same team from the previous term.

“We worked very well as a unit over the past five years,” he said.

“I think it says something that it's the first time in the history of the area that the same six have been re-elected.

“Everything we do will be for the betterment of the county,” he added.

Cllr Pat O'Toole was equally delighted with his election last week and extended a heartfelt thanks to everyone who supported him.

Going forward, he says it's a very exciting time for the county as Center Parcs prepares to open its doors this summer, giving Longford a chance to really show off its tourism potential.

And, he added, he's really excited about the town team, which will help to improve the Ballymahon area in the coming months and years.

Gerard Farrell was worried initially when the boxes were opened in Athlone and early tallies suggested his seat could be taken by Edgeworthstown's Brigid Duffy.

That worry stayed with him throughout the count and, following his election, the relief was written all over his face.

“I'm delighted to get there and delighted to be returning as part of the nine (Fine Gael) seats in Longford County Council,” he said.

“It ended up I was far enough ahead and I stayed ahead so I'm delighted with that.”

For full election coverage, see the Elections 2019 section of www.longfordleader.ie