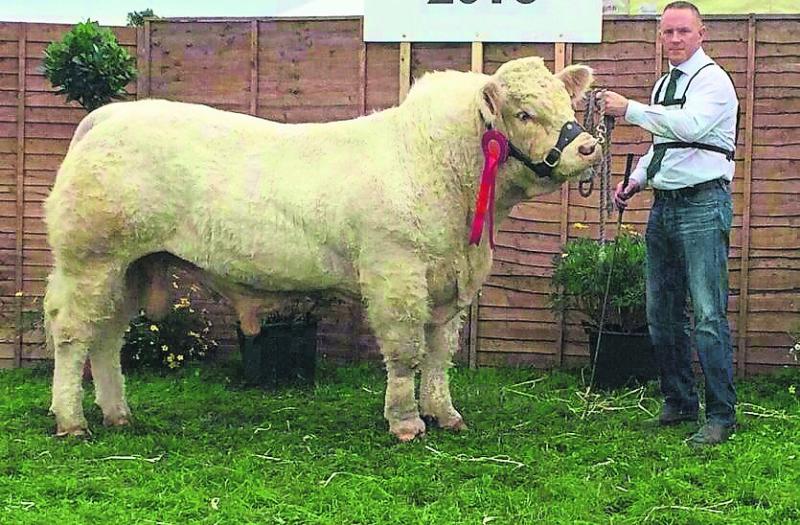 Drumlish native Noel McGoldrick, pictured showing one of the bulls from his pedigree Charolais herd. Noel was recently named the new president of the Irish Charolais Cattle Society

The farmer runs his own pedigree herd, Cloonohill Pedigree Charolais, which he first set up twenty years ago in 1999.

Noel explained, “The first pedigrees I bought were from a lovely couple in Donegal in 1999.

“They were the first two animals I bought and they turned out to be very lucky for me. I run a small pedigree herd with some commercials in it, just outside Drumlish.”

The McGoldrick family previously ran a commercial herd, until a family tragedy put everything into perspective for the Drumlish native and pushed Noel to make the jump into breeding pedigree cattle, as he felt their previous system was too time consuming.

Noel said, “I'm originally from a family of five. My father passed away when I was 15 and myself and my brother were farming the land for three years, but then my brother was killed in a car accident outside Drumlish in December 1997.

“That was the catalyst for change and put a lot of things in perspective for me. I then looked at reducing numbers in 1998.”

His reasons for choosing the breed for which he now represents are abundantly clear.

Noel explained, “For me, Charolais were always the number one choice. If we bought in stock for feeding over the winter, it was always Chx we bought. You have power, potential and a greater chance of making a profit at the end of the day. Nothing touches them in terms of weight gain.

“Charolais’ are driving the ringside at the moment. They are making €150-€200 above anything else in the commercial market at the minute. It is becoming more and more prominent as a greater gap in quality appears,”

Although busy with his full-time job managing McLoughlin transport in Carrick-on-Shannon, Noel also shows cattle in his spare time.

“I show nearly every year. Last year was the first time in 19 years I didn’t actually show anything, as I decided to relax and enjoy the shows for the summer, but I intend on showing again this year.” he told the Leader.

“We (ICCS) run our own Nationall show every year in conjunction with the Tullamore livestock show. That will be a very big show again for us this year,”

Noel previously served as treasurer of the ICCS council after being elected in 2016. The new ICCS president says he hopes to continue on from the good work started by his predecessor Kevin MaGuire.

“I am the youngest elected president that the society has ever had. I am very privileged to take on the role. It is a great honour and a massive vote of confidence from the council in my ability and passion for the breed.

“A chairman is only one person. We have a large council. As they say, there is no ‘me’ in team. I am lucky to hold the role of president for the next twelve months, but we have some very well respected stockman on board and we are only ever going to be as good as we are collectively,”

Although the cost of running a pedigree herd has increased, the society have already sought to help alleviate these increases by lowering their membership costs. These cost increases are something Noel remains wary of.

Noel, “The cost of running a pedigree herd has increased dramatically in recent times and in recent years we reduced membership feeds to try and help farmers.

“We are always looking at ways to help decrease costs.”

One challenge facing the society in the coming years is a lack of involvement by younger farming enthusiasts, something they are hoping to tackle with their Youth Development programme, which offers workshops to young farmers throughout the country.

“Our clearance rates are only increasing further in our pedigree sales.” said Noel as a testament to this fact.

“I am confident in the society's ability to move forward and of the Charolais’ place in beef production in Ireland. They have been the backbone of beef production in this country for many, many years and I have no doubt they will remain there,” he concluded.