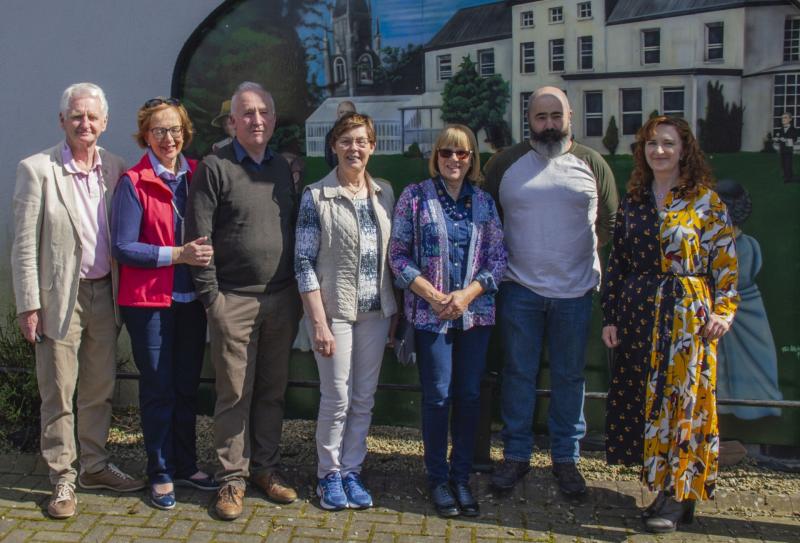 Once again the Edgeworth Literary Festival reached new heights and was extended to a four day event.

One of the highlights of the festival was the addition of an 18th Century Costume Tea Party (see page 35 for photos) held in the historic setting of St John’s Rectory. Many of the local community got into the spirit of the occasion by dressing up.

The Tea Party included music, dance and drama with performances by Betty, Grace, Sandra and Abby of Cnoc Mhuire, Granard accompanied by Harpist Laura Reilly and of course young members of the local traditional group including Grace Ross and Erin Ross.

This was the culmination of a wonderful weekend that started on Thursday with students from St Mel’s College experiencing the delights of the Edgeworth Literary Trail and was followed by a health and wellness talk by Longford Nutritional Therapist Laura Thompson.

On Friday evening, the Green was the location for the children’s poetry event where novelist and poet Nuala O’Connor presented the prizes to the winners.

She was high in her praise for the standard of entry and how the competition forms an important part of the festival as it encourages an interest in literature among young people and enhances the awareness the children have for Maria Edgeworth.

There was a wonderful performance by the Mostrim Youth Choir under the direction of Kate Crossan and Noreen McLoughlin and concluded with a short drama performance of Lady of the Fertile Ridge, a play written especially by Pauline Flood and directed by Kate O’Donoghue for the Mostrim Youth Players.

Saturday was a busy day starting at 11am, with workshops by Nuala O’Connor and Paul McVeigh.

This was followed by a guided walk in the beautiful nature reserve at Glen Lake. The group was led by Ecologist Noreen McLoughlin. This was a well attended, great family occasion and was enhanced by the beautiful weather.

This year is the 400th anniversary of the arrival of the Edgeworth family to Mostrim and to mark the occasion, the Society commissioned Longford based artist, Phil Atkinson to paint two murals representing the town’s historical past.

The artist Phil, surpassed himself on this occasion. The murals depict the Edgeworth family and is based on the Adam Buck Pastel, with the second mural depicting many of the historical figures associated with the town, Oscar Wilde, Sir Walter Scott, Oliver Goldsmith, William Wordsworth and Charlotte Brooke.

The Murals were unveiled by Longford Heritage Officer, Mairéad Ní Chongaile who praised the ongoing positive work being undertaken year after year by the local community and in particular the Edgeworth Society and its dedication to protecting the town's heritage.

Other speakers included Tom Dooley on behalf of the Tidy Towns and he said the murals are a great addition to the appearance of the town and will create great interest to locals and visitors.

Annually the highlight of the weekend is the concert in The Manor. This year was no exception and a large attendance was treated to a wonderful evening of entertainment with contributions by writer and poet, Nuala O’Connor, writer Paul McVeigh, writer and broadcaster Aidan O’Hara, singer Eleanor Quaine and the local Comháltas Ceoltóirí Eirean group made up of Sean Marshall, Jim McLoughlin, Noel Sweeney, Olive Kilbane and Phil Clarke.

The evening also included the presentation to the winners of the prestigious Maria Edgeworth Literary Competition with all winners loving the opportunity to read from their works.

The MC for the evening was Matt Farrell and he took the opportunity to thank all those who work so hard to make the event such a success, to the management and staff of Our Lady’s Manor for permission to use the beautiful setting of the church.

He paid a special thanks to Sister Dympna for her ongoing support and her commitment to the Manor.

2020 will be the 25th anniversary of the Edgeworth Literary Festival and its energetic Chairperson, Angela Tuite stated that plans are already in place to mark the occasion with a very special weekend.