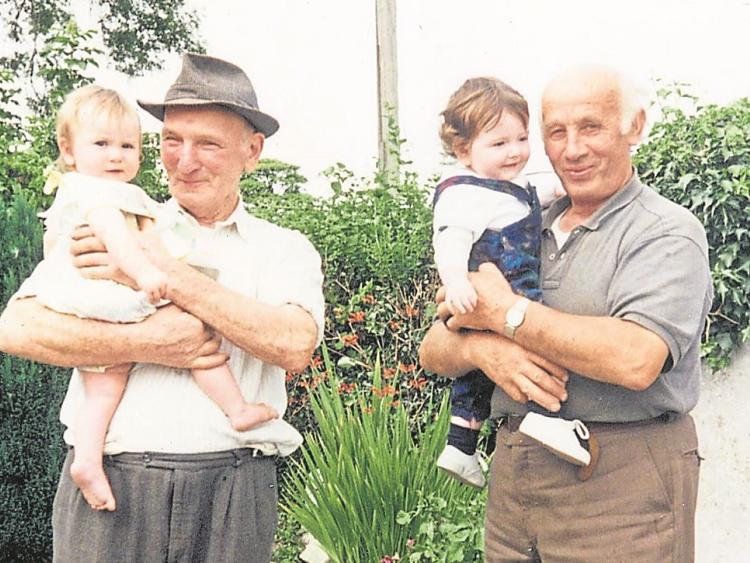 The late Matt O’Hara (left), wearing his trademark dapper hat, pictured with his good friend of a lifetime, Ned McEvoy, who is now the oldest in the townland. Ned, who is 96, is hale and hearty.

When streaking flames and thick smoke appeared in Kiltyclough, about two miles from Ballinalee, one evening around 55 years ago, neighbours came out of their houses and looked, aghast, wondering where exactly was the blaze.

It quickly became apparent that O’Hara’s house was on fire.

Matt’s lifelong friend, Ned McEvoy, arrived across the one field between them first.

Together they tried to douse the flames. But it being a thatched house, their efforts were mostly in vain.

The house was ruined.

Matt took the children and placed them in the temporary care of McEvoys, told them that all would be okay, and returned back across the field separating them, to the ruined house with his wife Beesie and they knelt down to say the Rosary.

This extraordinary incident, amidst a time of devastation and terrible loss, epitomised all that Matt stood for.

This eternal bond of love and faith was the foundation of their lives. He really did firmly believe that nothing more was needed, apart from prayer, to live and remain immune to the travails of life.

As it turned out Matt O’Hara lived a long life, aged 101 when he passed from this world on Wednesday, March 13 last.

Sitting down to write this, simply to mark his passing, is proving an uneasy task.

Whilst Matt may have been the ‘The Captain’ (to Beesie), courteous, genial and hard working, Beesie was the first mate wife, mother, supporter, witty, and also hard working.

They lived in the age of improvisation when, if you didn’t have the means or tools to do a job you had to find your own alternative and as we all know ‘necessity is the mother of invention’. So it is no surprise that all four of their children are successful business people.

The townland of Kiltyclough is rather unique in our parish.

The neighbours, particularly of Matt’s generation, were extremely close. They loved and lived for each other, working together, celebrating together, grieving together.

He was a special favorite with the children, and two generations of McEvoys enjoyed his company, his stories, and his fun. He was great fun.

There was always laughter in his company with young and old.

Tall, lean, and looking fit, he cut a dash on the dance floor at the celebration of his 100th birthday at the Hillside Club in Ballinalee. He loved socialising, and with his good friend Packie Brady never missed the club outings.

His trademark was the dapper hat he always wore. At his funeral Mass, his grandson recalled visiting him after returning from abroad. He found Matt all dressed up to travel to a wedding in Wexford. His immediate concern was alleviated slightly by the news that Matt’s godson, Edward McGivney - now in his seventies - was driving!

He drove his tractor into the village, dressed in his Sunday best, and lit up the room on arrival. He was soft spoken and seldom showed annoyance, but his conversation was always interesting; a unique opinion, and a fresh outlook on current affairs.

On his way home one night he was stopped by a young guard on duty and quizzed as to where he had been, and where he was going. Matt answered honestly and added all his outings every week to the list, which led to a queue of cars building up behind the tractor - which Matt had switched off to chat.

Eventually, the young, and bemused as well as frustrated guard sent him on his way telling him to be careful.

The words ‘old fashioned’ could never be applied to Matt despite his longevity.

He was broad minded and open minded, right to the end, travelling with Maureen and Ron to Spain and enjoying the culture, landscape and livelihoods there, following the escapades of the younger generation, and noting the changes in our own modern society.

He was a faithful follower of Sean Connolly’s football, especially when the ‘big fella’ (as he called Frank) was playing, and celebrated their successes.

Matt saw much unrest, and much healing in his lifetime, and often talked of the great change in Ireland.

He thought a lot of time was wasted talking politics; ‘talk but no doing’ he’d say.

How true that is; talk is cheap and paper never refused ink. The legacy left by Matt, and those of his generation is the example they set, the way they lived, with honesty & integrity.

Predeceased by his wife Bessie, Matt is sadly missed by his loving family, daughters Maureen and Eileen and sons Brian and Frank, sons-in-law Tom and Ron, daughters-in-law Mary and Pauline, grandchildren Colin and his wife Rachel, Ronan and his wife Orla, Cian and his fiancée Mara, Eoin and Niamh, great-grandchildren Sean, Matthew and Katie, relatives and friends. He was laid to rest in St Emer’s cemetery on Saturday, March 16.