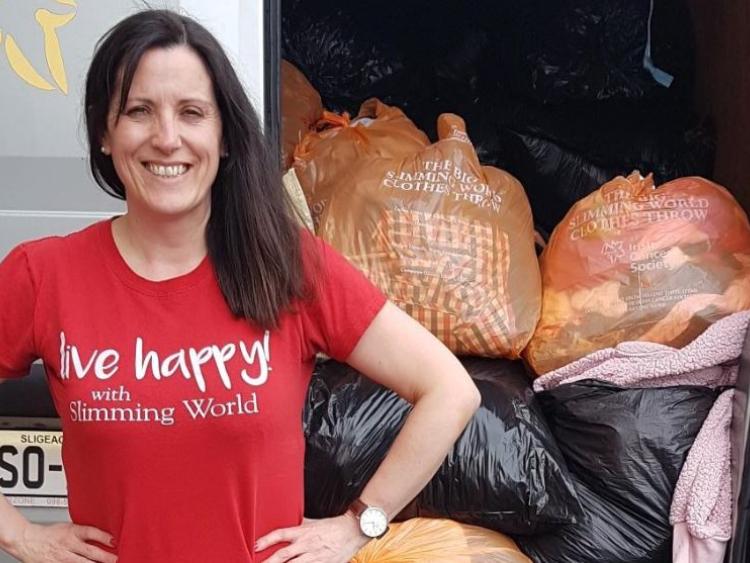 So confident they’ll never need their larger sizes again, slimmers across County Longford have raised €19,560 by donating the clothes they’ve successfully slimmed out of to the Irish Cancer Society.

The bags were donated to Irish Cancer Society shops as part of the national fundraising campaign, which this year goes ‘gold’ as Slimming World celebrates its 50th birthday year.

As part of the Big Golden Slimming World Clothes Throw, anyone who finds a special golden bag is in with a chance to win a VIP shopping and makeover experience.

The Big Golden Slimming World Clothes Throw aims to raise awareness of how keeping a healthy weight can reduce the risk of developing some types of cancer. Each of the filled bags is worth around €30 to the charity, and this year’s campaign is aiming to beat the total raised in 2018.

Read also: Slimming World consultants from Longford and Cavan 'worth their weight in gold'

Tona Daly, who runs the Newtownforbes Slimming World group, is delighted to have raised so much money for charity. She says: “I can’t quite believe how many bags we managed to collect. I knew our members were amazing but I didn’t expect such an incredible level of effort – wow!

“Seeing members donate their too-big clothes is just the cherry on top for me as a Consultant. What I find so special is seeing members transform before my eyes as they lose weight. Many go from shy, apprehensive individuals who join with their confidence at rock bottom. They don’t believe they could ever lose the weight they dream of losing. When I look them in the eye and tell them they absolutely can be the size they want to be – whatever that is – and that I truly believe in them, things start to change.

“At group, members learn to remove feelings of guilt around food, and instead feel empowered by all the Free Food they can enjoy on Slimming World’s healthy eating plan Food Optimising. Through Food Optimising, they learn to change the way they think about food by making changes to the way they shop, cook and eat, and they lose weight without ever feeling like they have to restrict a thing or go hungry.

“Members also make friends in group, they celebrate success together and they are there for one another through the more challenging times too. As the weight drops off and the energy levels soar, many of them become more active too – walking, swimming, playing with the kids… there really is no stopping them! They shed the shackles of their former selves – including the clothes they’ll never fit in again too.

“So many people don’t know how much of a difference losing weight can make to health – including reducing the risk of developing a range of problems including some types of cancer. Hopefully this campaign and our efforts for charity will help inspire more people in County Longford to improve their health and change their lives by losing weight too.

I’m so proud of my members and their efforts. They really do put their heart into everything they do. Whether it’s their weight loss, supporting each other each week or raising money for charity... they continually blow me away!”

Anyone who would like to find out more about Slimming World or the Big Golden Slimming World Clothes Throw is invited to get in touch with Tona, who runs the Newtownforbes group every Thursday at 5.30pm & 7.30pm at Miranda Moran’s Physiotherapy Clinic. Or call Tona on 087 3400600.