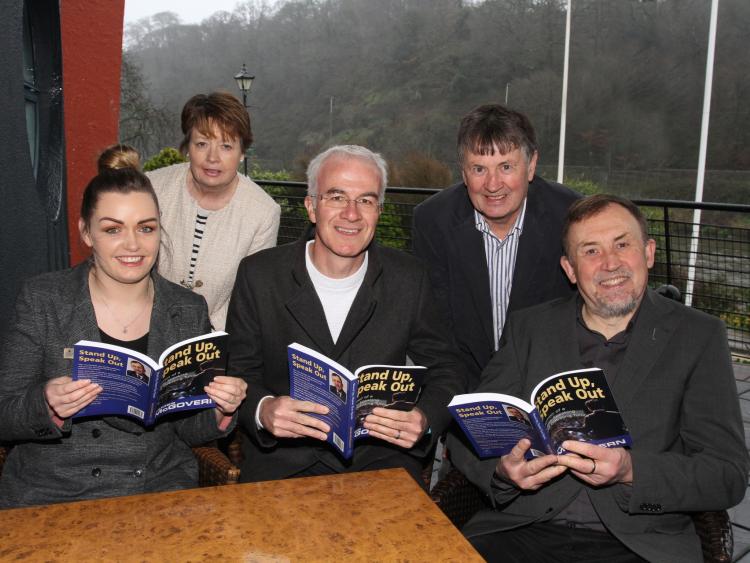 Michelle Conroy of the Riverside Park Hotel, Enda Brady of Sky News and P.J. McGovern, known as Jim in Co. Wexford and at back Kay McGovern and P.J.s brother, her husband Hugh. Photo: Pat O'Connor

Sky News journalist Enda Brady has well known Longford connections and was delighted recently when he had the honour of launching his uncle PJ McGovern's book, Stand Up, Speak Out, in County Wexford recently.

PJ himself is a Longford man, hailing from Dring. He is a member of the Association of Secondary Teachers of Ireland and the launch of his memoir also marked his retirement from his 37-year career as a secondary school teacher.

Among the Longford people at the launch in Enniscorthy were solicitor Fergus Feeney, Fr Paddy Madden and Fr Paddy's brother Tom.

John Keegan, chairman, and Paddy Brady, a selector from the Mullinalaghta, St. Columba's team, were also among more than 230 people who attended the launch.

James McGovern’s public speaking and debating teams have done what many regarded as the impossible. They defeated more than 350 school teams to win All-Ireland public speaking and debating finals in the MHAI project, the Forum on Europe, the Maynooth Aoife Begley, Knights of Columbanus competitions and repeatedly defeated the elite Dublin private schools entering the prestigious Phil Speaks university competition at Trinity College and won.

The book, which is subtitled Memoir of a Public Speaking and Debating tutor, chronicles James McGovern’s 32 years as a tutor during his 36 years as a history and religious education teacher at St Mary’s CBS Enniscorthy.

He is a graduate of St Mel’s College, St Patrick’s College, Maynooth and of the Gregorian University in Rome, where he studied for the priesthood before opting for a career as a lay teacher of history and religion.

The attendance included the president of the Association of Secondary Teachers of Ireland, Breda Lynch.

He said: “James McGovern’s book, Stand Up, Speak Out is at one and the same time a persuasive call for the recognition of the important role public speaking and debating can play in education.