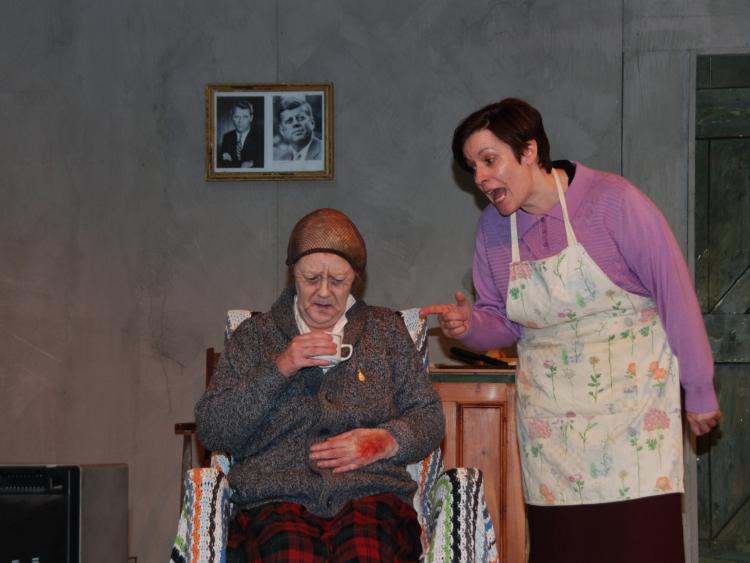 Christine O'Brien perfectly portraying the character of Maureen as she argues with her mother, Mag, played by Eileen Murphy.

It could be said that The Beauty Queen of Leenane by Martin McDonagh is a play about control, as the elderly Mag tries to control the life of her 40 year old daughter Maureen for her own selfish reasons.

When it appears that Maureen may have a first and last chance of love, it is this controlling nature of Mag that leads to her devastating demise.

The setting for the play is a cottage in the hills of Leenane, Co Galway and, instead of the set looking like an exhibit from the Museum of Country Living, the director chose to keep it sparsely yet practically decorated. Every item on the stage had a function and nothing was there to distract the audience or the actors.

From the hanging tapestry of Pope John Paul II to the working fridge, everything just seemed to fit. Having placed a large kitchen table in the centre of the set seemed off at first but, as the play progressed, it gave great definition to the separate worlds of Mag - eternally in her rocking chair – and Maureen - relentlessly slaving in the kitchen.

The lighting of the various scenes was nicely varied throughout with great use made of the light coming from the range for Maureen’s monologue towards the end of the play.

The selection of music coming from the radio, if a bit crisp sounding, suited the time well, with the piece that accompanied the torture scene giving a great counter balance to what was happening onstage.

Given that the play lives and dies on the relationship between Mag and Maureen, the performances given by the actors in these roles is critical.

From her appearance on stage as the audience were taking their seats, Eileen Murphy, as Mag, seemed right at home in her rocking chair.

On the few occasions that she left the chair, the fragility in her physicality helped to hide the devious character underneath.

In playing Maureen, Christine O’Brien embodied the browbeaten skivvy who never seemed to have a moment to herself. Every time she got to exhaustedly sit, she had to rise again to see to another chore barked by Ms Murphy’s domineering Mag.

Where these two actors really shone, however, was in the many heated and sometimes comical exchanges the pair shared; whether it was about spending time in a 'nut-house' or Kimberly biscuits, Eileen and Christine always seemed to find a truth in the dialogue and never allowed it to be overplayed.

The performances given by this inseparable double act in the deeply disturbing torture scene will be remembered for a long time to come.

Maureen’s Love interest, Pato Dooley, was played by Tom Lyons. Tom brought a nice playfulness to the role from his awkward romancing at the kitchen table to trying to make conversation with a shocked Mag on the morning after.

It was, however, in the letter reading scene that Tom allowed the audience to see behind the character’s bravado to the gentle spirit hoping for a chance to win back his Beauty Queen.

Amid all the hatred and heartbreak of course there was plenty of comic relief. The character to provide a platform for a lot of the overt comedy in the play is Ray Dooley.

Newcomer to Backstage Theatre Group, James Quinn took on this role. He seemed to relish the part and never missed an opportunity to help balance out the darkness of the play with well-timed delivery of lines and physical gags.

There was a lovely raptor built between his character and Mag as the play progressed and his perfect blindness to Maureen’s true character gave for a great moment with the swing ball scene.

The only aspect of the night not in the control of the director was how the audience would react to the production.

The rapturous applause the audience gave as the final lights dimmed was uncontrollable and nothing short of what Ollie, cast and crew deserved for bringing this classic play to the Longford stage.