Jimmy Keary play to be staged at The Hill, Newtowncashel this weekend 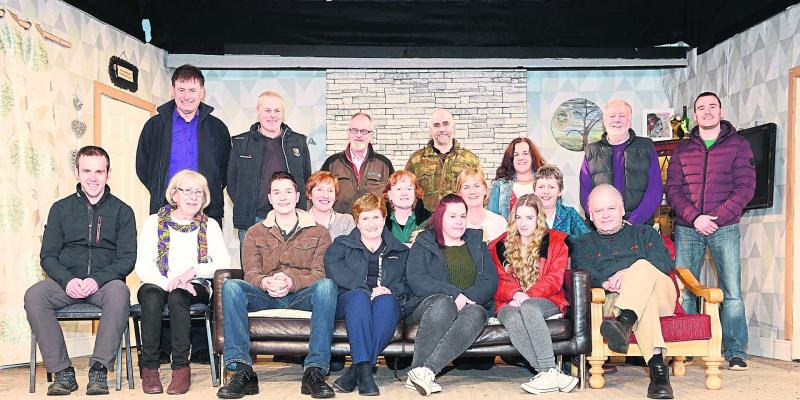 The cast of Mammy's Boy, which will be staged at The Hill, Newtowncashel, this weekend.

Fresh from their sell-out success of the staging of Martin McDonagh’s The Beauty Queen of Leenane in December 2018, the cast and crew of the Newtowncashel Drama Group has been busily rehearsing and preparing for their latest three-night presentation during the first week of March.

Mammy’s Boy, by local playwright, Jimmy Keary, is a hilarious three act play, which has been staged internationally, in Chicago (by the Gaelic Park Players), and in Calgary, Canada (during the Acting Irish International Theatre Festival).

Jimmy Keary hails from Rathowen in Co Westmeath, and began writing in the early 1970s, and during a period of six and a half years, composed over one-hundred detective/adventure stories.

Debuting a production of Drama at Inish in 1977 at St Patrick’s college, Maynooth, Jimmy went on to write further plays, and then sketches for the RTE series Davis at Large, having joined the Rathowen Amateur Dramatic Society in 1980.

By 2018, Jimmy had written no less than twenty-one, three-act comedies!

Mammy’s Boy, set in present day rural Ireland, follows the unfolding farce in the lives of Betty McGarry and her mother, Maisie, who are distracted from their usual routine by a letter arriving from Maisie’s son, Hughie, explaining that he is coming home.

Betty is less than impressed by Maisie’s excitement, and is caught between jealousy and suspicion at the arrival of this out-of-the-blue news. Within a matter of days, Hughie lands at the house.

Immediately, Hughie sets to work, setting the scene for the revelation of his real motives and intentions behind his impromptu return to the nest, beginning with Dermot Delaney, a neighbour and admirer of Betty, whom Hughie coaches in the art of wooing, in order to distract Betty from his grand plan.

Enter a cast of characters, including the elderly and worldly-wise Joe Duggan, Bernie Burns, the conniving dog-grooming girlfriend, Lorraine the estranged wife, and Niamh McGarry, the inquisitive Garda.

Will Hughie emerge from events unscathed? Will his plans to lay claim to the family home come to fruition? Or will Maisie see through his scheming ways?

Find out on Friday March 1, Saturday March 2 or Sunday March 3 at 8.30pm nightly, at The Hill Newtowncashel.

Tickets are priced at €10/€5 and can be purchased by calling the Box Office on 086 252 1536. Admission by ticket only. A raffle draw will be held at the end of each performance.