It's imperative the people have their voices heard 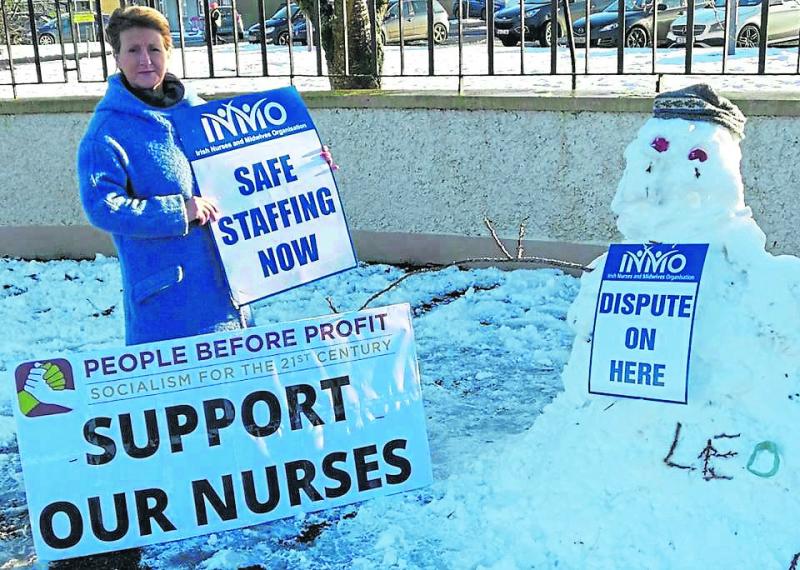 Barbara Smyth, who will be running as a local election candidate for People Before Profit in the Longford Municipal District, supporting the Irish Nurses and Midwives Organisation members.

Barbara Smyth was this week unveiled as the People Before Profit (PBP) candidate to contest the May 24 local election in the seven seat Longford Municipal District.

The members of the Longford Branch of PBP selected Ms Smyth, who said, she was ‘delighted’ to accept their nomination.

Ms Smyth, who unsuccessfully contested the 2014 local election on the Sinn Féin ticket and subsequently ran as an Independent general election candidate in 2016, suggested that ‘it is imperative the people have their voices heard’.

She said, “Politics here in Longford has been dominated by the establishment parties, the parties whose recklessness brought us the disgraceful economic crash that hurt the average family here so much.”

The PBP representative argues that these parties ‘brought us the highest levels of homelessness in the history of this state; they’ve persistently failed to deliver a health service that is fit for purpose, and they simply won’t build houses for those in need’.

Ms Smyth believes that there is a better and fairer way to enable a rebalance of the massive wealth divide witnessed in the last few years.

Among her priorities will be striving to bring vacant and abandoned council housing back up to standard.

She is also calling for the appointment of an independent inspection body to carry out inspections, repairs and upgrades for homes in council ownership.

One of the driving forces behind working to establish and bring a gymnastics club to Longford, Ms Smyth says she will continue that work.

“We are now in the middle of our LEADER application, having met our funding milestones,” she revealed. She added, “I would like to thank Longford County Council for allocating the club €7,500 for match funding. This was a lifeline for our Club and allowed us progress our funding application.”

Continuing on the theme of recreational facilities, Ms Smyth said, “Longford County Council passed a motion to locate a site and apply for funding for a skatepark and I will make sure this initiative for our young people is not forgotten.”

The PBP candidate concluded, “We must never forget, Longford County Council is the people’s council. It is imperative the people have their voices heard and if elected, I will be doing that.”