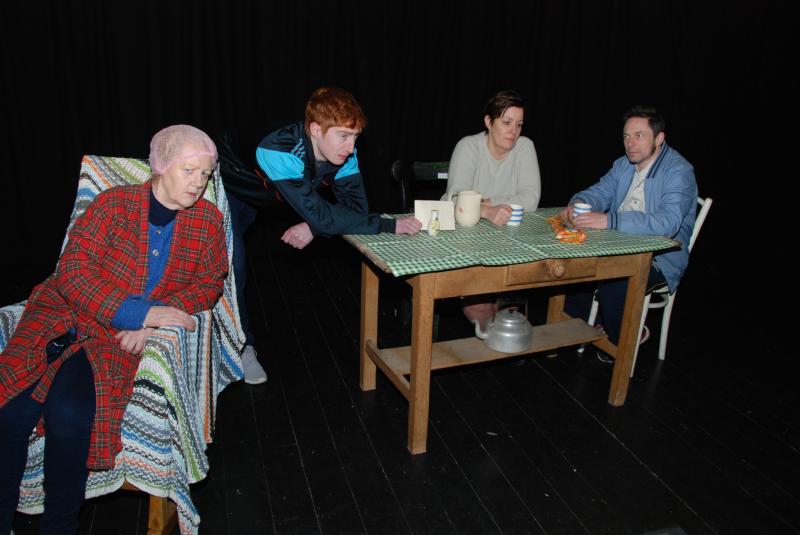 Martin McDonagh's 'The Beauty Queen of Leenane' is a “stunning piece of work” according to director, Ollie Kenny, who will bring the world-renowned play to the Backstage Theatre in mid-February.

The Backstage Theatre Group celebrated its 30th birthday in late 2018 with the very successful production of Brian Friel's 'Winners' and, just a few months later, they're back with an even more iconic piece of theatre.

I'm doing this play because it's written by one of the greatest playwrights ever. He's a great living playwright,” Ollie told the Longford Leader last week.

That Druid production took place in February 1996 in Galway before it travelled to Longford and several other Irish theatres ahead of its step up to London's Westend.

The play tells the story of Maureen Folan, expertly played by Christine O'Brien in this Longford production.

Maureen is a 40-year-old spinster living in the Irish village of Leenan, Connemara in the early 1990s with her 70-year-old mother Mag (Eileen Murphy), for whom she acts as caretaker.

Mag’s interference in Maureen’s first and potentially last romantic relationship sets in motion a chain of events that are as tragically funny as they are horrific.

“It's a stunning piece of work. It's absolutely stunning,” said Ollie.

“It's difficult on a whole number of levels, not least for the actors to learn the lines because of the way it's written. It's pretty much a direct translation of the Irish idiom in Connemara. So it makes it very, very difficult to remember.”

Rehearsals are going very well so far, with all four actors putting their all into learning their parts. And, Ollie added, you couldn't find better actors to play the four characters in the play.

“Eileen Murphy who plays Mag has a wealth of experience. She's been with the group a long time,” he said.

“She's a founding member and she's been in a lot of our productions. She was in the festival circuit with us when I directed 'Blind Spirit' and, more recently, she was in 'Same Old Moon' and I've been in lots of plays with her. And she's also with Beezneez.

“Christine O'Brien plays Maureen and she has a wealth of experience too. She has numerous best actor nominations, won awards as best actress and is one of our most experienced actresses now.

“Tom Lyons is playing Pato, the love interest. Tom has been in lots of productions. He was in the most recent full-length productions that we did, which were 'The Accused' and 'Bookworms'. And he has lots of experience as well.

“But the new kid on the block is a guy called James Quinn. James is playing Ray Dooley, Pato's brother. James played Francie Brady in 'Frank Pig Says Hello', which was a joint venture between Backstage Theatre Group and Backstage Youth Theatre.

“He's graduated out of the youth group into the senior group now and wait 'til you see him. He's brilliant.”

'The Beauty Queen of Leenane' will come to the Backstage Theatre on February 14, 15 and 16 and all tickets for the Valentine's night show are already sold out, with tickets for the other two nights selling fast.

Showtime is at 8pm on each of the three nights. For tickets, call into the Backstage Theatre box office, call 043 33 47888 or book online at www.backstage.ie.