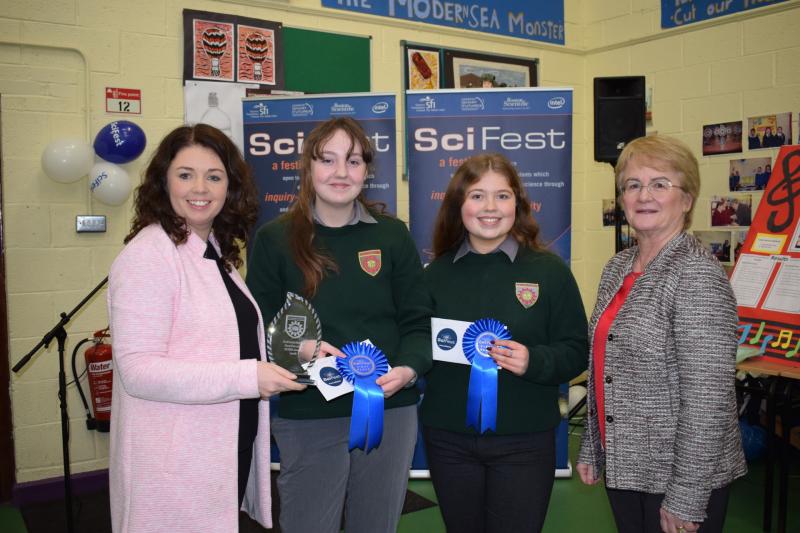 This was the school’s fourth SciFest@School and it was the biggest one yet! A lot of hard work went in behind the scenes by the organisers of the event which was a huge success.

Students demonstrated their knowledge of science, technology, engineering and maths through their creative and innovative projects.

Some of the projects on display included an ‘examination into the flammability of housing materials’ and ‘comparing the effect of various thickening agents on the viscosity of water’.

Students from three local primary schools, Fermoyle, Cloontuskert and Ballyleauge presented their projects alongside the students from Lanesboro Community College.

There was a brilliant atmosphere in the assembly hall with parents and guests mingling with the judges as the students presented their projects.

Liz Lavery, Director of Schools with LWETB went around every stand and said she thoroughly enjoyed the event, whilst Anne Lynch from SciFest Ireland praised the quality and standard of the work being presented.

After two rounds of judging and much deliberation, the winners were announced.

A study of Asian clams along the ‘hot stretch’ in Lanesboro took the Overall Senior award whilst a study into the amount of time and money spent by GAA players got nominated for the Overall Junior award.

Fermoyle Primary school was awarded the Overall Primary prize for their investigation into the staining effect of different substances on teeth.

Commenting on the success of the science fair, Bernice Martin said: “We are delighted to host SciFest@School in our school because the SciFest competition allows students to develop their study of science, technology, engineering and maths, outside of the classroom and apply it to everyday life.

“All of the students have worked very hard on their projects and should be very proud of their achievements.

“The achievement of these students is an inspiration to us all and is a tribute to them and to the hard work and support of their teachers.”