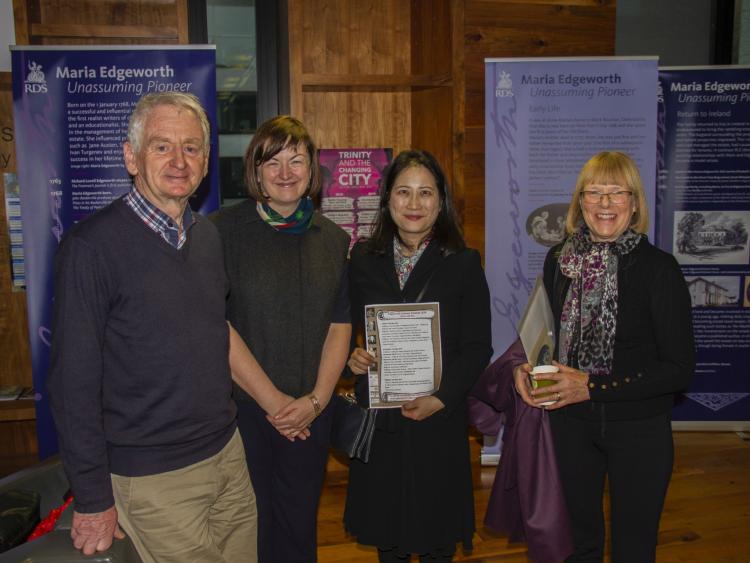 They came from four continents to celebrate the legacy of the novelist, writer, child philosopher and educationalist Maria Edgeworth on this the 250th anniversary of her birth.

Four of Ireland’s leading institutions, all of whom had close connections with her, The Royal Irish Academy, Trinity College, The National Library of Ireland and the RDS all came together to host a wonderful series of events as the final celebration in this her anniversary year.

The weekend of events got off to a wonderful start on Thursday evening when the Royal Irish Academy hosted a four-woman panel discussion on the legacy of Edgeworth as novelist, playwright, social reformer and feminist.

There was a full house with the academy hosting a post event reception in the splendid rooms of the academy.

This event preceded a two-day conference in Trinity College Dublin, the conference covered many aspects of the life and legacy of Maria Edgeworth.

There were thirty speakers who travelled from Canada, North America, Japan, China, Japan, South Korea and many European countries.

On Saturday morning guests and participants visited the National Library where they had the opportunity to view rarely-seen Edgeworth manuscripts which according to library staff are part of our National Treasures.

This was followed by an awe-inspiring talk by Dr Susan Manly. Susan lectures in English at St Andrews University Scotland and is currently working on a major work on Edgeworth due for publication in 2019.

Throughout the weekend, the RDS displayed a wonderful Edgeworth exhibition which was on display at its library in Ballsbridge through the months of October and November.

Coinciding with the event Radio Producer Claire Fitzpatrick recorded the events which will go out on RTE in 2019.

Part of the documentary was recorded in Edgeworthstown on Sunday last and featured Camilla Kelly and Peter Costello who performed recently in the very successful production of Castle Rackrent at the Backstage.

It was also appropriate that Maria Edgeworth should be remembered one hundred years after women received the vote as she was a pioneer in championing the place of women in society.

Seventy five years earlier she was accepted into the Royal Irish Academy as an associated member and one of the first women to be allowed into the Academy.

Matt Farrell of the Edgeworth Society took the opportunity of the conference to thank the organisers of the event under the direction of Professor Jarlet Killeen TCD and to all the speakers who travelled from all parts of the world to participate.

This ends the celebrations for 2018 which included the publication of 'Letters from Ireland' by Valerie Pakenhan, the publication of a National Supplement, various conferences around the world and of course the local production of Castle Rackrent performed in the Backstage and supported by Creative Ireland Longford.

The Society are now looking forward to the building of the new Community Library in Edgeworthstown and the enhancement of the 1840 Schoolhouse which is one of the attractions on the Edgeworth Heritage Trail.