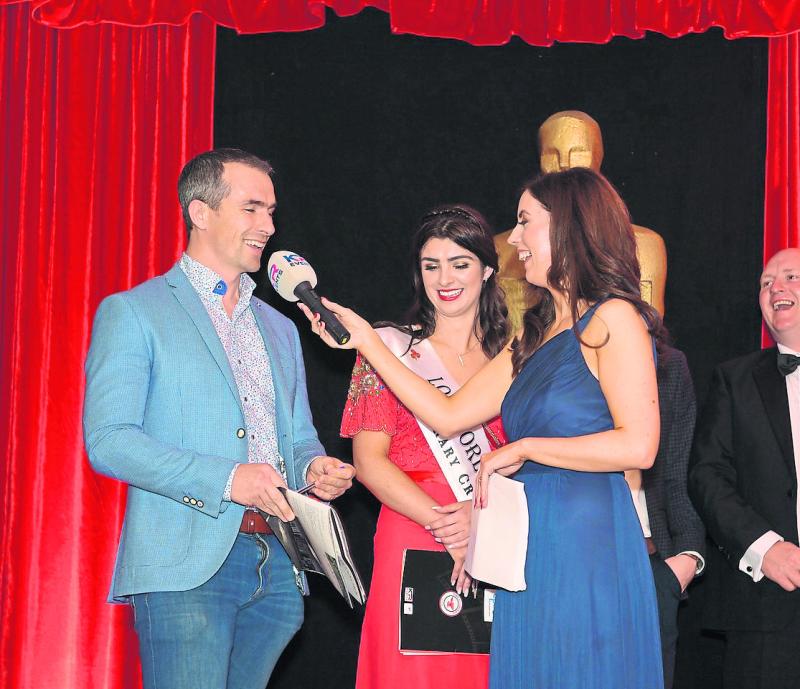 Westmeath footballer and pundit Dessie Dolan, a Judge on the night, being put through his paces by RTE’s Sinead Hussey, much to the amusement of Longford Rose Loren Katie Logan. Photo Pauline Brady

One of the most memorable occasions on the local calendar in Ballinalee in recent weeks was Sean Connolly’s GAA Club’s staging of the Longford OsKaRs.

Fifty actors, along with sponsors, committee members film buffs and interested spectators filled the Longford Arms Hotel last month for what was a night to remember.

In the end it was ‘The Snapper’ which took home the coveted Best Film award to much acclaim.

Actors and directors spent several weeks filming at various locations around Longford and in Ballinalee before eventually hitting the red carpet on OsKaRs night.

It certainly was an evening like no other and one Ballinalee and its populace won’t forget in a hurry.

The festive season also coincided with a visit from RTÉ’s Drivetime programme as it highlighted the benefits of the area’s local link service.

Reporter John Cooke travelled to Granard where he boarded a nighttime service from Granard to Longford.

During the recording, aired in recent days, he spoke to bus driver Brendan Curran who extolled the virtues of a service which is steadily becoming more and more popular with each passing week.

“The service we provide is a lot cheaper than taxis,” he said, adding a return to Longford is competitively priced at €10.
“It’s a brilliant idea and I would use it myself if I wasn’t driving.”