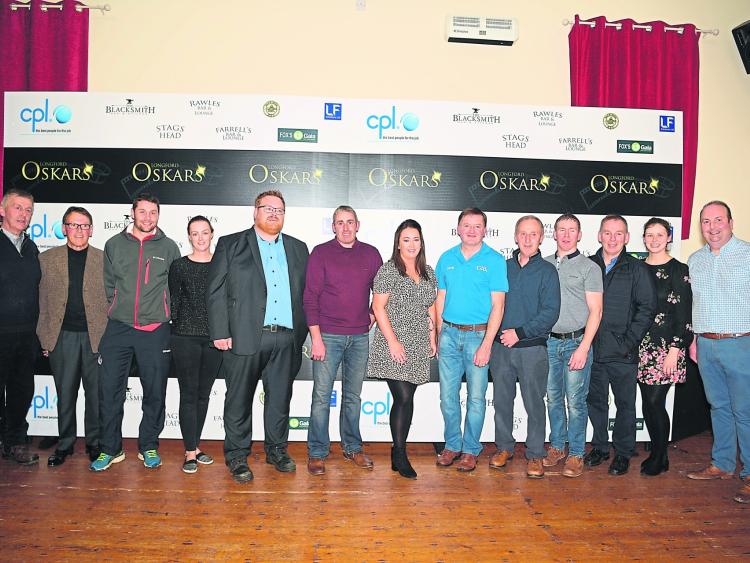 Fifty actors, along with sponsors, committee members and film buffs, filled the Thomas Ashe Hall, Ballinalee on Friday evening to find out which film they will be rehearsing and acting in for the eagerly anticipated Longford OsKaRs, promoted by Sean Connolly's GAA Club, which takes place on Saturday, November 24 in the Longford Arms Hotel.

There was great excitement as the gold cards containing the film names were opened and people started to realise that this big fundraiser was really underway.

Actors and directors have one month of filming at various locations around Longford and in Ballinalee before they hit the red carpet on OsKaRs night.

Mattie Fox, Chairperson of the OsKaRs committee, welcomed all present, and thanked the sponsors for their generosity.

He explained that all the names on the backdrop sign designed by Iain Cheyne, secretary of the OsKaRs committee, and built by Pascal Hennessy and Andy McNamee, had donated a minimum of €2,500 each to Sean Connolly’s.

Mr Fox pointed out that multiple other sponsors came in at €5,000 and one at €4,000, with Ballinalee native Anne Heraty who holds a special place in her heart for the old locale, donating a significant amount to sponsor the OsKaRs, through her company, CPL Resources, of which she is CEO.

That done, he moved on to explain that he’d call up the individuals in each film, and when they were up onstage someone would be chosen to announce the name of film.

The Hall became very quiet as he started naming the groups.

Second group up were Louise Hillary, Michael Keogh, and Frank Reynolds Snr. Just the three, and Michael Keogh announced that the film was – ‘Misery’!

The Longford OsKaRs committee hope to raise much needed funds for Sean Connolly’s GAA club which is a big part of community life.

Club Chairman Frank Reynolds said it was great to see such huge support out and the excitement this project has brought to this area and the wider communities.

After the announcements, great conversations ensued between groups, and it looked like many new friends would be made through the Longford OsKaRs.