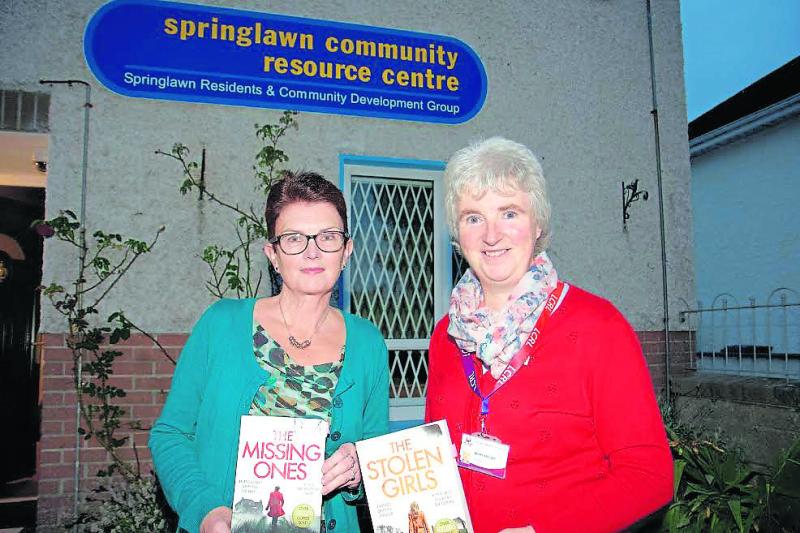 A new Book Club was established earlier this year in Springlawn and recently local Irish crime writer Patricia Gibney dropped in to offer some advice about the publishing industry.

She also spoke about her own journey and the efforts it took to get to where she is today with four crime books already published and another due out today!

Her writing, it seems, saved her from the depths of grief.

About a year after her husband Aidan died, Patricia says she crumbled and fell apart, and it was her writing that brought her back to the surface.

Author of the 'The Missing Ones', 'The Stolen Girls', 'The Lost Child' and 'No Safe Place', the Ballynacargy native and self published Irish crime writer has sold more than a million books on Amazon and recently signed up with Bookouture.

She says that when she started out with her first publication - a children’s book - she knew nothing about publishing, business or any of the elements associated with the industry.

And yet, it was through this very personal journey that the character of Lottie Parker, who is the main character in her latests books, and works as a detective in the fictitious Ragmullin (Mullingar) where all the bodies are found, began to take shape.

“I always read crime novels, so that was the road I was going to take,” she smiled, before pointing out that because of the fictitious name, she doesn’t have to stick to hard facts and is therefore in a position to move places, scenery and other elements around in the books.

The local author says she always wanted to be a writer despite the fact that she worked for a long number of years for Westmeath Co Council.

Meanwhile, Patricia’s first novel, The Missing Ones was well received and she was encouraged to publish it.

At the time of writing she joined the Irish Writers' Centre and engaged in a number of writing courses which helped her on her way.

Patricia subsequently sent 'The Missing Ones' to an independent editor for an appraisal.

“When she said, ‘I think you can salvage this’; I was so upset for about a week over that, but when I looked at it in the cold light of day I realised that it did need a lot of work,” the local author continued.

“So I got on with it and it took about a year to get it to a stage that I could actually send it to an agent.”

And so, on January 1, 2016 Patricia Gibney signed her first agent and the book was sent out.

“Then the rejections started,” Patricia continued, before adding, “they say you are not a real author until you have been rejected”.

Shortly after, Bookouture, a digital publishing company in the UK contacted the Irish crime writer and said it wanted to sign her up for four books.

'The Missing Ones' was published in March 2017.

Her latest installment - 'Tell Nobody' - is due out this weel and fans are currently waiting in anticipation.

“Life is not about waiting for the storm to pass; life is about learning to dance in the rain,” Patricia concluded.