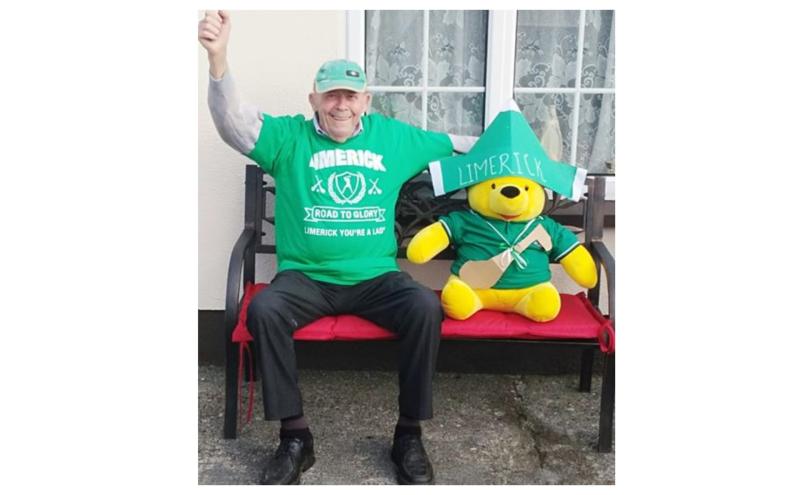 Limerick native Christy Meade, who came to Longford in 1969, is pictured with his Mascot Elton.

The strains of 'Limerick, You're A Lady' will be ringing around Connolly Crescent in Longford town on Sunday evening if the Treaty County manage to dethrone reigning All-Ireland champions Galway and capture the Liam MacCarthy Cup for the first time since 1973.

Christy Meade (pictured), is a native of Elton, Knocklong, Co Limerick and he is looking forward to Sunday's eagerly awaited hurling showdown.

Christy was one of the proudest men in Croke Park on September 2, 1973, as Limerick, captained by Éamonn Grimes, and featuring star men like Pat Hartigan, Richie Bennis, Éamonn Cregan and Joe McKenna, defeated Kilkenny by 1-21 to 1-14 to win the county's seventh All-Ireland senior hurling crown.

After 45 years in the hurling wilderness, Christy is hoping his beloved Limerick, managed by John Kiely, can win their 8th title by putting Micheál Donoghue's Galway to the sword.

Unfortunately, Christy won't be going to Sunday's match due to ill health, however, he will be glued to the action on television where he will be joined by his wife Mary Jane, daughter Majella Beattie and her husband Tom.

The family previously ran the Halfway House in Tarmonbarry for years and if Nickie Quaid, Seamus Hannon, Richie English, Aaron Gillane, Kyle Hayes, Graeme Mulcahy, Cian Lynch, Gearoid Hegarty and Co can do the business, then there'll be great celebrations in and around Connolly Crescent.