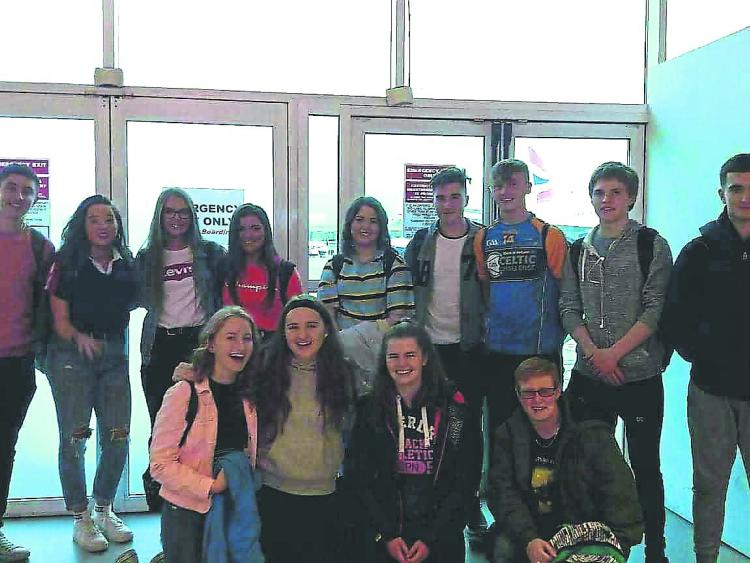 The Transition Year committee from Longford's Attic House which travelled to Edinburgh recently.

From computers to music sessions, there's something for everyone.

I've been a member of the Attic House since I began first year at Meán Scoil Mhuire, Longford and have many great memories thanks to them.

One activity that happened recently was the Transition Year committee's trip to Edinburgh.

After spending the year organising and holding the successful music event "Toni's Night to Remember" for Aoibheann's Pink Tie, the trip felt well-deserved.

As a member of the TY committee, I was lucky enough to go on this excursion.

The two days we spent in the city felt like a week after all the sights we saw and activities we did, and we all would have stayed longer given the chance.

After trying out some Scottish breakfast, our first outing was to Camera Obscura and the World of Illusions. The quirky attraction offered a rooftop view of the city, classic illusions and brilliant visual effects.

If you're ever in the mood to walk through a mirror maze, shrink, grow, swap heads or become a severed head, this is the place to go.

We also saw the Camera Obscura show: technology developed in the Victorian times that allowed us to watch the streets of Edinburgh live from a table.

Thanks to the mirror and lenses, we got a tour of the narrow closes of the Old Town and the sophisticated streets of the New Town without ever leaving our seats.

Later that day, we went to Locked In, the city's only escape games based in real rooms rather than sets. In the Secret Lab, we had an hour to break the locks and codes that would lead us to find the cure for the L.I.E. (top marks for pun delivery) before the entire city could be infected with lying.

The puzzle was challenging and engaging, even when we were ready to smash down every locked cell with frustration.

Despite feeling exhausted after a long day, we still went to see the new Ocean's 8 film in the evening. Opinions on the film were somewhat divided, but we could all agree that a good night's sleep was much needed.

The next day, we were in for more thrills at the Edinburgh Dungeons. Based on real events in the darkest parts of the city's history, the Dungeon brings together an amazing cast of theatrical actors, special effects, stages, scenes and rides in a truly unique and exciting walk-through experience that you see, hear, touch, smell and feel.

We were introduced to some of the lovely locals, like witches, grave robbers and plague doctors. We were treated to a pleasant boat ride through cannibal-infested caves and were hanged for our crimes in the Drop Dead: Drop Ride to Doom. We were also told that the only thing scarier than the Dungeons was the Edinburgh weather.

After this exhilarating experience, we had plenty of time to explore the streets of the city, appreciate both the gothic and modern architecture like the Scott Monument and Clock Tower, and maybe get a bit of shopping in too.

Before we knew it, we were on the plane going back to Dublin. The trip was a memorable experience that served as a great way to end the school year.

There were few ill words to be said by anyone, except maybe the number of hills we had to suffer in the city; we didn't get much warning for that.