Ballymahon Tidy Towns: 'A battle we might be losing' 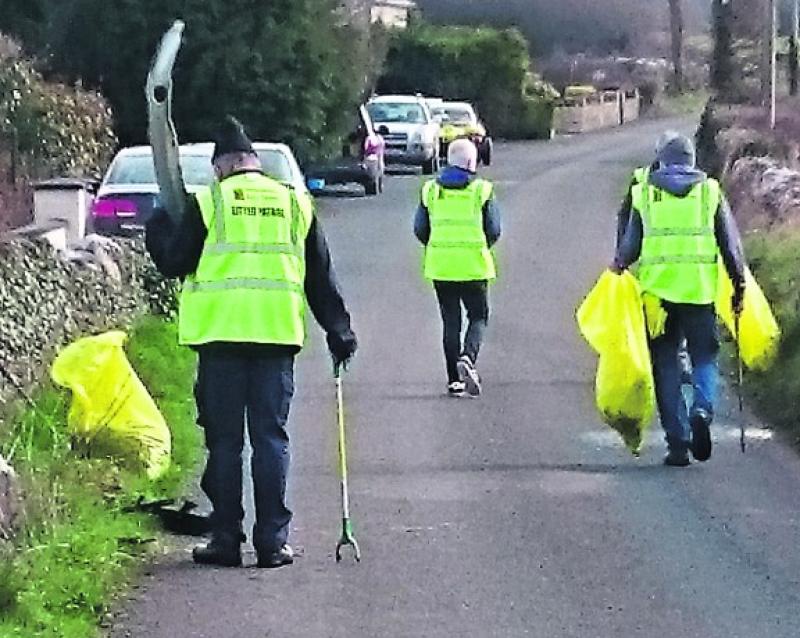 Like most Tidy Towners, we love nothing more than spending a fresh Sunday morning on the streets, cleaning up after the night before.

The town doesn’t look too bad, despite all of the digging and the lorries and the potholes.

Flowers are coming out after the longest winter ever. Revellers are taking care to dispose of their rubbish, even if the odd pizza box gets wedged in the mouths of the street bins.

The dogs are another story, but we’ll let them off because they haven’t learned to read the signs telling them to clean up after themselves yet.

Animals of a different kind have been on our minds. Recently, we’ve been extending our efforts out along the approach roads to town, searching for treasure.

The pickings are rich; tyres, bottles and cans, takeaway wrappers, foil takeaway trays — one serving a fine curry chip breakfast for some fussy rooks. Sweet wrappers. Random pieces of metal and plastic debris from cars. Plastic wrapping in all lengths and colours, snarled high in the thorns of hedges.

And as for the bulging, bursting nappies — the length of a litter picking tool is not long enough to keep you as far away from those as you’d like. But the contract does not allow for discrimination or squeamishness, so everything gets lifted and bagged.

And bagged some more.

Except for the carrier bags of rubbish already tied neatly and thoughtfully dumped there for us, of course. How very kind!

Half an hour’s rooting and lifting and heaving and stooping yields a collection that would do a small household proud at the end of a month.

But the real villains of the peace are the uncountable and non recyclable trash of the takeaway coffee industry. It must be all the caffeine, that seems to bring out the hyperactive litterbug in some people. We wonder if a truck delivering fresh cups and lids has crashed and shed its load, so many are there.

The other day a passing car beeped the horn at our group in salute and slowed. The driver rolled down the window, not to seek directions, nor to ask us if we’d nothing better to be doing of a Sunday.

Instead, he grinned, and flung his empty cup on to the verge at our feet before driving off. A rare sighting. Usually, no one ever catches these mystery tippers and dumpers in the act, much less knows where they live. They’ve fled the scene, run away. Must be shyness.

There’s a lot of this culture and belief in the ‘away’ when it comes to our rubbish and the environment. The idea that if it’s not in my car or cluttering up my backyard, but instead can be spirited off into that magical land called ‘away’ then all will be well.

Clean it away, throw it away, someone else can haul it away. Leave your dirty plate for that friendly waitress to take away — she doesn’t mind. Look up at the plane full of holiday makers jetting away, tracing a pretty white trail across the sky until the wind blows it away.

Or slow down the car, fire it out the window, floor the pedal and speed away. Sure won’t the Council or the Tidy Towns come and take it all away?

But there’s no such place as away. Away is here, down in the ditch on the road into town, and here in the blackthorn branches above. Here, someone has to deal with it.

Here, in rural Longford, and all across our island. And we’ll do our best to deal with it, because we’re an indefatigable crew, most of the time.

But until our fundraising efforts stretch to a battery of covert CCTV cameras and some DNA testing kits for swabbing the rims of coffee cups, and until we’re persuaded that the majority of ordinary people actually give a damn about this disgrace, it’s a battle we fear we might be losing.