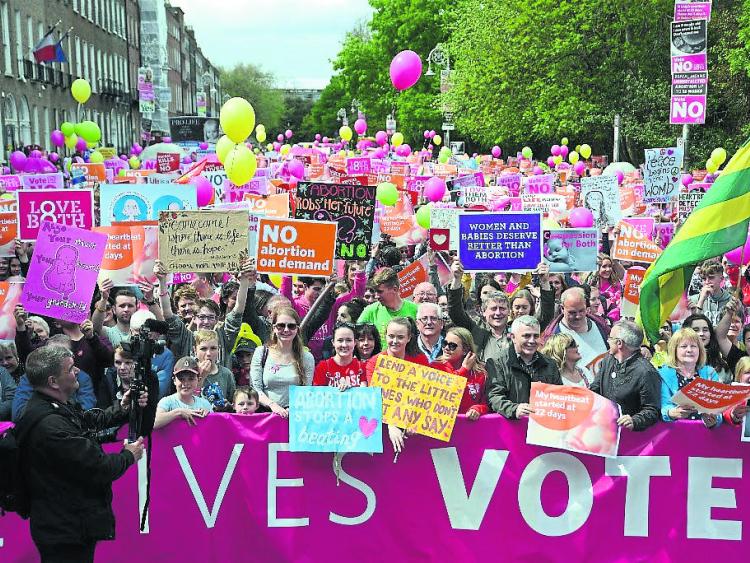 A section of the crowd that attended the Love Both rally in Dublin last weekend.

Thousands attended the final Love Both rally in Dublin on Saturday, the last of six regional rallies which took place around the country in recent weeks.

Speaking to the crowd in Merrion Square, Caroline Simons, legal adviser to the Love Both campaign said:“If the 8th Amendment is repealed, Ireland will go from being a country that protects unborn human life to one of the most extreme abortion regimes in the world. Let us be very clear, the Government’s proposal is not about abortion in ‘hard cases’, it is about introducing abortion on demand.

“That’s the stark, sad reality of the proposal brought forward by Health Minister Simon Harris. It is even more frightening than England’s abortion law, where 1 in every 5 babies loses his or her life to abortion.

“Simon Harris’s proposal defines abortion as a ‘procedure intended to end the life of the foetus.’ The intent couldn’t be clearer.

“There is no mention in the proposal of making every reasonable effort to save the life of the baby when carrying out the procedure. The goal is to end a life, not save one. It has nothing whatsoever to do with healthcare.”

Dr Andrew O’Regan of the Medical Alliance for the 8th said: “We have heard a litany of falsehoods and exaggerations – designed to create a climate of panic – to distract from the reality of repeal – which is unrestricted abortion on demand.

“The fact is Ireland with the 8th Amendment is among the safest countries in the world for a woman to be pregnant. Audits of death and sickness in pregnancy confirm this. What’s being proposed by the Government is not healthcare.

“The proposal goes against the most basic principles of medicine: to heal, to cure to save life… never to harm and certainly never to intentionally end a life.”