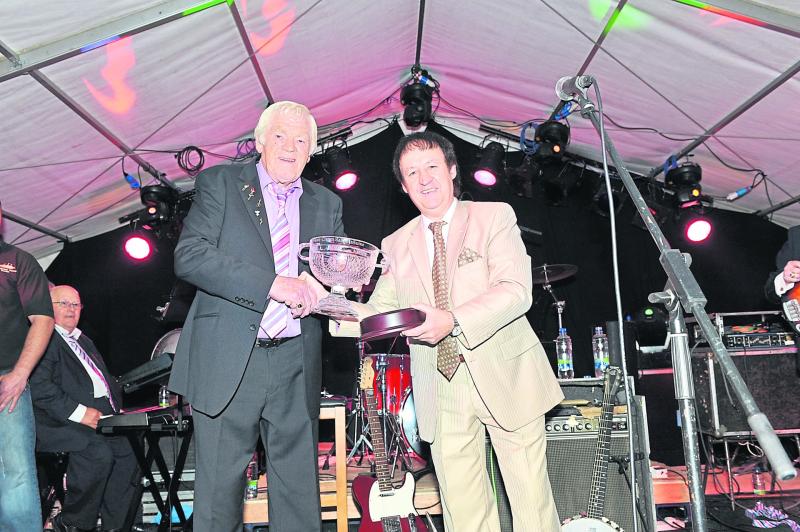 Declan Nerney makes a presentation to Big Tom at the Marquee in Drumlish Festival in 2011.

He said that when he thought about the depths of the Irish music scene and what ceili bands had done for country music, it warmed the cockles of his heart to see it back in top position again.

“Even if you think of Thin Lizzy,” he smiled.

“They would never have been heard of if it wasn’t for Whiskey in the Jar - a great Irish song.”

Meanwhile, for Declan, the seeds for greatness in the industry were sewn many years ago when Big Tom McBride entered the arena.

It was 2011 though, the year when the Monaghan man descended on the Marquee in Drumlish that Decla says is one of his fondest memories of all time of Big Tom.

“That night Big Tom arrived into the Marquee with his band The Mainliners and together they lifted the roof off,” he explained.

“There is no doubt in my mind but that night will live on in the hearts and minds of numerous Co Longford people for many years to come.”

He said the initial feeling that night when Big Tom began performing was one of disbelief.

“It sounded so good and when Big Tom came on stage and sang ‘Four Country Roads’ it was unbelievable.” Declan said.

“That particular night there was a lot of young people at the Marquee - Oxygen had been on that weekend and a lot of people stopped off in Drumlish on the way back from there.

“Some of them spoke to me after Big Tom’s performance that night and they told me that they had never experienced anything like it in their lives.

“Now that was a serious endorsement not just for the country music scene but also for Big Tom himself, and it is a night that has stayed with me ever since.”

Meanwhile, Declan, who has earned himself huge success on the country music circuit too with well known numbers like the 'Marquee in Drumlish'; 'Ballad of Big Tom', 'Anna from Fermanagh' and 'Galway John', to mention but a few, said that Big Tom’s musical influence on the nation as a whole had been huge and just like the entertainer he was, his personality was also larger than life.

“I think that in many ways, Big Tom was like the pope,” the north Longford singer smiled.

“All he had to do was walk into a room and you felt his presence; it was his personality too and his gentle way that attracted him to people.”

Declan, who played alongside the many country music greats in Ireland at Big Tom’s graveside on Friday as they belted out ‘You’re Goin’ Out the Same Way you Came in’ said there was a huge void left now in the industry as a result of the Co Monaghan singer’s departure.

“Big Tom was Ireland’s Elvis; right up until he died people were coming from all over the country to meet him in person at his home in Co Monaghan,” he added.

Also read: Big Tom sings 'Going out the same way you came in' at funeral of Noel Cassidy in Ballinamuck, Co Longford

“That was what Big Tom was - he was an ordinary man who was an extraordinary country music singer and performer; his songs and his way captured the very essence of what country music is all about.

“Big Tom would never have set out to change people’s attitudes, but he did.