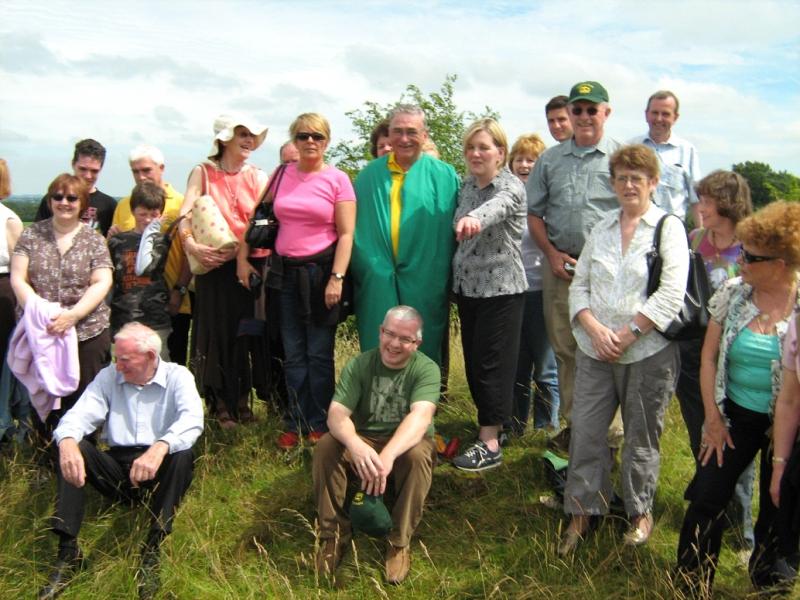 Members of the Farrell Clan led by Chieftain Conal and Chairman John C. pictured on Moatfarrell in 2008.

This year, the Farrell Clan celebrate the Silver Jubilee of the first clan reunion in 1993 and it promises to be the biggest and best clan Rally to date.

Already the clan have received bookings from Argentina, Mexico, Malta, the USA, Canada and Great Britain.

On Tuesday next, March 20,  the rally will be launched at a function in the Longford Arms Hotel commencing at 8pm. Cathaoirleach of Longford Municipal District, Cllr Mae Sexton, will be the guest speaker.

All Farrells and their descendants and relatives are invited to attend this function. The Committee are anxious to also invite Farrells from the neighbouring counties of Leitrim, Roscommon, Westmeath and Cavan.

The ancient Farrell territory of Annaly covered part of these counties and to this day many Farrells still reside there.

This will be the 8th International Clan Rally.  The inaugural rally was held in 1993 at the instigation of two Roscommon based women, Mary Kelly (nee Farrell, Killashee) and Margaret Dockery (nee Farrell, Carlow).

Farrell Rallies have also taken place in Canada and Mexico. In 1995 a delegation from Longford, led by Chieftain Conal, travelled to Mexico city where Conal laid the foundation stone for a Farrell Castle.  Over the past 25 years more than 1000 Farrell visitors have come to Longford making a significant contribution to the local economy.

Robert Farrell explained, “Social media and the recent interest in and advances in DNA testing have generated a greater interest in the overseas diaspora.”

He added, “We believe that this rally will be larger than any so far and we are anxious to involve more locals in welcoming these guests. Come along to The Longford Arms on Tuesday, March 20 and get involved with The Farrell Clan.”

Also read: Clock winds down to Longford Sleep out for Simon fundraiser