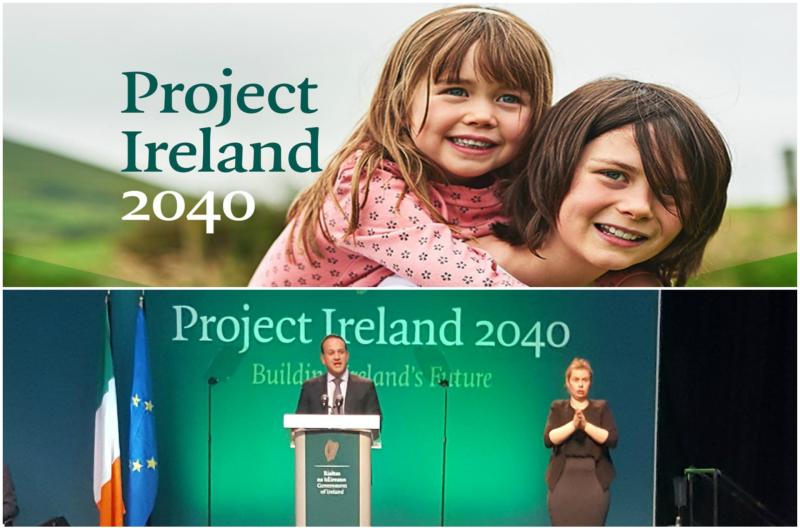 Project Ireland 2040: Deputy Peter Burke says measures are in place to ensure that Longford and its economy will grow

Project Ireland 2040 was launched amid much fanfare in Sligo IT on Friday and in this article, Longford/Westmeath Fine Gael TD, Peter Burke, gives his opinion on the the new plan.

"Ahead of the Ireland 2040 plan, I met with government colleagues and sought commitments in a number of sectors for Westmeath and Longford in relation to key areas of investment which I believe our region needs.

Many of these commitments are contained in Project Ireland 2040. Regardless of any designation of towns, this is the single biggest investment into our towns to date. Over the next 22 years, measures are in place to ensure that Longford and its economy will grow.

The road network is extremely important for towns like Longford and the upgrade of the N4 is a huge bonus for the many that commute and travel the 50km between Mullingar and Longford on regular basis.

This will work to open up Longford and will improve road safety hugely in the region. The significant cost it will take for this investment is balanced by the safety improvement it will provide for locals.  There is also the provision for a new town bus services.

A tourism brand to cover Longford has been researched, prepared, tested and is fully ready to launch during Q2 of 2018.  This will be extremely positive for the county.

Minister for Rural Development Michael Ring has announced a €1 billion fund over 10 years for Regeneration projects, which are exactly what some areas are in need of.

I lobbied for this and I note that the Minister specifically mentioned Longford as being at an advanced stage with projects to draw down funding.

I sought continued government commitment in relation to Mullingar Hospital and in the plan published today there is the explicit commitment that Mullingar Midlands Regional Hospital will receive a new radiology unit and MRI unit and staff to match this expansion.  We also will have four brand new operating theatres.

Furthermore, I understand more investment will be secured through the bed capacity review which will be announced in the coming months.  The hospital is a key part of this constituency in relation to both our health and employment, and it provides a top quality service to both counties and further afield.  I am working hard to ensure the hospital continues to grow and it receives more investment in relation to both the facilities and staff numbers.

Another new announcement contained in the plan is that Mullingar is one of five selected locations for a new ambulance base which will benefit residents of the town, county and further afield.  There has been a need for this in recent times and I am glad to see that this need is being reflected and acted on in the plan today.

In the first draft of the Planning Framework there was no mention of designation of towns, so the addition of Athlone will benefit all of the midlands region including Longford and Mullingar.

I note that many have exaggerated and over-egged the significance of this designation, incorrectly naming it a city or a capital of sorts.

It will not mean that other towns will be limited at all in their growth, and I have sought a commitment directly from Minister Eoghan Murphy that the designation of Athlone as a “hub” will not have the knock-on effect of decreasing the power of Longford.

No cap will be placed on Longford, and I will continue to push for further investment and industry.

As recently as last December, Mullingar received a €2 million Government investment for IMR which is located at the old Imperial Tobacco site.  Phase 2 of this scheme was launched in Project Ireland 2040 which will total a further €30m.

I am working with local companies in relation to securing these large-scale grants which will provide further employment and growth in the Longford and any designation of other towns will not affect this whatsoever.

We all need to work together and get as much Government investment as possible into both Westmeath and Longford and this plan contains significant amounts for all major urban areas in the constituency.

Furthermore, there are rural schemes which have worked extremely well in Longford which funding has been ring fenced for as part of the plan.

Last year, the majority of projects that applied for the Town and Village Renewal Scheme in Longford were successful. These include €76,000 for village enhancement in Newtownforbes, €80,000 for an Enterprise Hub in Edgeworthstown among others.

This is real money being pumped into rural towns and I am delighted that these schemes have been renewed and will be offered again in the coming years.

Furthermore, I understand the Sports Capital Grant, which was worth €1.6 million this year to clubs in this constituency, will be offered again and will be open as early as this June of this year.  €100 million has been allocated to this fund for the next four years under Project Ireland 2040.

This is our plan for the future of Ireland. For the first time in the history of the State, our spatial planning is backed up with solid investment and it will deliver for our citizens.

The National Planning Framework which forms part of Project Ireland 2040 sets out how Ireland can grow in a sustainable, balanced fashion over the next twenty years. 50% of population growth is planned for our towns, villages and rural communities and 50% for our cities.

Project Ireland 2040 is backed and supported up by a €115bn National Development Plan.  Our population is expected to have increased to 6 million people by 2040 and, without any State intervention, this will result in ongoing shift in population and jobs towards Dublin and the neighbouring counties. This is not in anyone’s interests.

Who would have thought that five years ago, we would be allocating a total budget of €116 billion of public money to invest in major projects the length and breadth of the country.

Longford has been through hard times, and some have not felt the effects of the economic growth as much as others.

This plan extends Government funding across the country in a more equal manner, and it will mean that infrastructure and access to services will now be standard throughout the country, with all locations including Longford receiving their fair share."