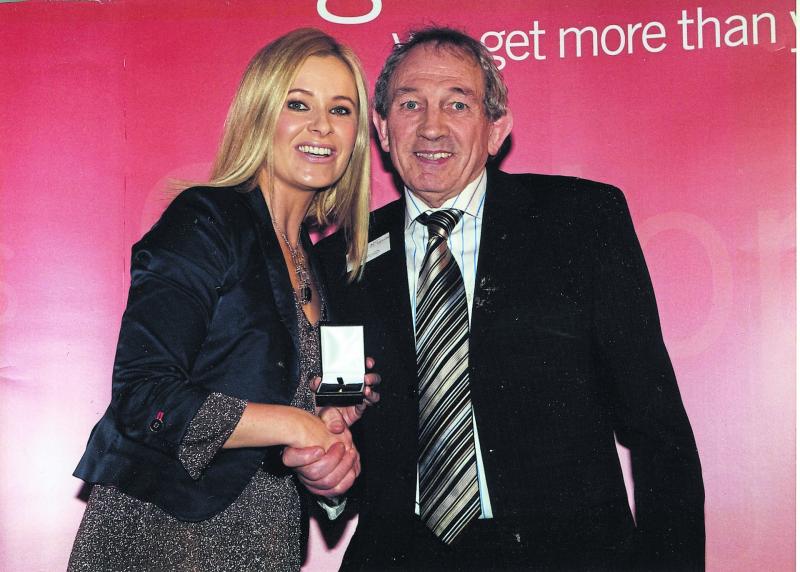 The late Pat McGowan was a proud blood and platelet donor and he is pictured above accepting an award from RTE's Sharon Ní Bheoláin.

Tributes have been pouring in for the late Pat McGowan, Ballymakeegan, Longford who passed away suddenly on October 30.

Family, friends and the local community are still in shock over his sudden passing.

Mr McGowan passed away at St James's Hospital Dublin, having fallen ill a few hours earlier at his family home before being rushed to Mullingar's Midland Regional Hospital he underwent tests.

He established and was Managing Director of Wood Products Longford Ltd, a joinery business for over 42 years and won numerous awards for his joinery which can be seen around the locality in Longford; Collete Kelly Options, Eamon Farrell's and The Longford Arms and nationally; The Department of Justice, Brown Thomas and Dublin Airport.

In retirement years Pat took up golf. Longford Golf Club paid tribute to Pat on social media and also in the Leader "Pat joined the club a few short years and got great enjoyment from the game. During that time he endeared himself to everyone who got to know him."

He was also an active member Longford Bridge Club with his wife Patricia playing weekly. He is greatly missed amongst the members there.

Both clubs arranged for a Guard of Honour at his Funeral, a tribute the family greatly appreciated.

He was also a blood and platelet donor. He loved the idea that you could make a difference to the health of someone's life or even save someone’s life.

For his regular donations over the he received numerous awards from The Irish Blood Transfusion Service. His family have continued his legacy by raising donations in lieu of flowers for the Irish Heart Foundation.

Pat McGowan reposed at his home on Thursday, November 2 and he was laid to rest following Funeral Mass at St Mel's Cathedral on Friday, November 3.

He is deeply regretted and sadly missed by his cherished and loving wife Patricia, daughter Louise, son Colm and grandchildren Tomás and Eoin, brothers, John, Michaél, Liam and Anthony, sisters; Mary and Margaret, sisters in law and brothers in law.