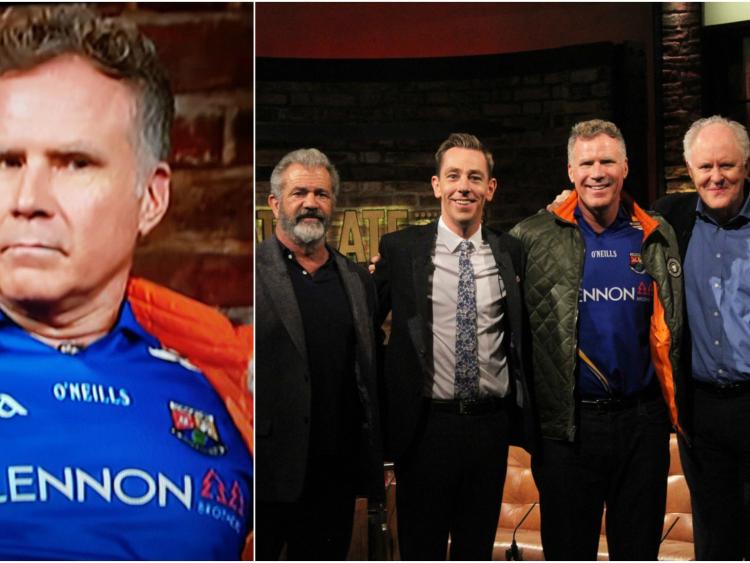 There was a huge Twitter reaction to Will Ferrell appearing on Late Late Show in his Longford GAA jersey.

There was a huge Twitter reaction to Will Ferrell appearing on The Late Late Show in his Longford GAA jersey last night.

Mr Ferrell, alongside his 'Daddy's Home 2' co-stars, including fellow Longfordian Mel Gibson, along with Mark Wahlberg and John Lithgow, were interviewed on Wednesday by Ryan Tubridy and the segment was screened on last night's show.

Mr Gibson, whose mum hails from Aughnacliffe, also mentioned how he is named after St Mel's Cathedral.

Ferrell's wearing of the Glennon Brothers Longford GAA jersey generated considerable positive publicity and maybe at some stage in the future we'll see Ferrell and Gibson formally invited to visit the county. Wouldn't that be wonderful promotion for Longford and put the county in the tourism shop window?

For the moment, enjoy this sample of the Twitter reaction to last night's Late Late Show interview;

Will Ferrell wearing the pulling shirt on a Friday night.A barrage of GAA online "articles" are frantically being thrown together now HON LONGFORD! #DaddysHome2 #LateLateShow pic.twitter.com/CeTv8sM4cA

So proud to be from Longford tonight. Fair play to Will for wearing our jersey with pride. He could have made it as county footballer but his career took him in another direction. Our Loss #longford #WillFerrell

Everyone wants to be from Longford! This could be our year! @OfficialLDGAA pic.twitter.com/LKwRwVEJaA

Will Ferrell in a Longford jersey, the boom is back pic.twitter.com/LBpUc3FIwP

Great to see the Longford diaspora taking centre stage on the #latelate but a pity John Lithgow was sidelined for most of that chat.

Will Ferrell is now a doctor of letters. @Mark_Wahlberg wants him to know how very proud he is of him. We think #latelate pic.twitter.com/xkjSHLA3Eo