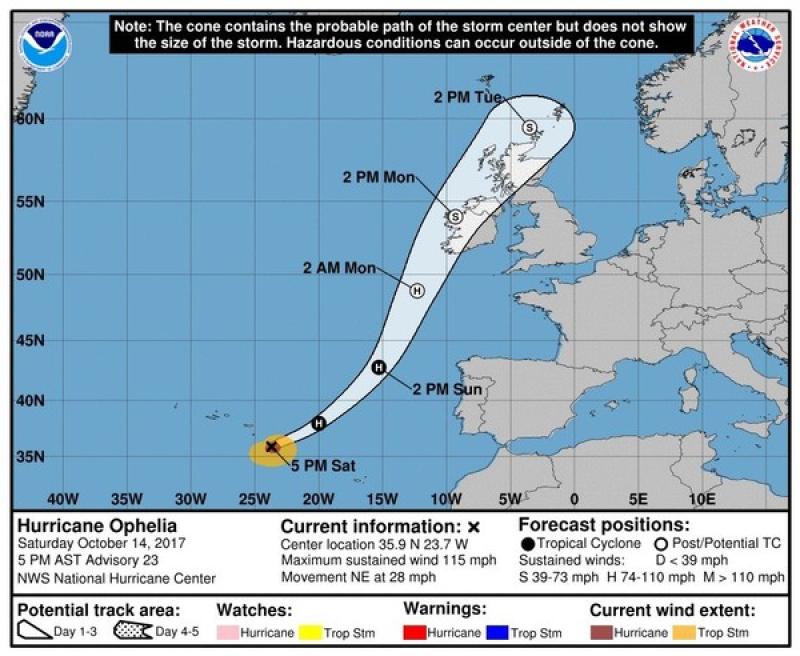 Longford set to be hit by Tropical Storm Force Winds during Hurricane Ophelia.

The National Emergency Co-ordination Group met today to discuss preparations for Hurricane Ophelia which is due to hit Ireland tomorrow and they have warned people to take heed of what is coming.

It is being reported that the storm is one of the most powerful storm systems to bear down on the country in half a century.

Officials from a number of Government departments as well as emergency services and the Defence Forces are discussing how to respond to the storm this morning.

Met Éireann has issued a red weather alert, its highest level warning, as the remnants of Hurricane Ophelia approach.

The national forecaster is saying that stormy conditions are expected to develop in the region on Monday. Rain will be widespread, some heavy falls likely and there is a risk of thunder, flooding and high seas. Strong gales are expected along western coasts during Monday afternoon and evening.

You may also be interested in reading: Weather Alert: #Longford firmly in the path of Hurricane Ophelia

Met Éireann expects by the time Ophelia reaches Ireland it will have been downgraded to a powerful post-tropical storm and will pass close to, or directly over, Ireland.

Red weather warnings refer to the most severe weather conditions in which people are advised to “take action to protect themselves and/or their property”. The warning is in place for counties Wexford, Waterford, Cork, Kerry, Clare, Limerick, Galway and Mayo from 9am on Monday until 3am on Tuesday.

With regard to those counties who have a red weather warning, Chair of the National Emergency Coordination Centre Sean Hogan has advised that all schools and childcare facilities should not open.

School buses will not operate on Monday in those five western counties where the status red alert is in place. Bus Éireann says it has cancelled the services to ensure children are not put in any danger.

Mr Hogan said everyone needs to take heed of what is coming and that public safety is of primary concern.

Wind gusts of over 130km/h are expected to batter western counties tomorrow and Tuesday.

Sandbags have been distributed in some counties.

It is expected that school transport services will be disrupted across the country due to the storm.