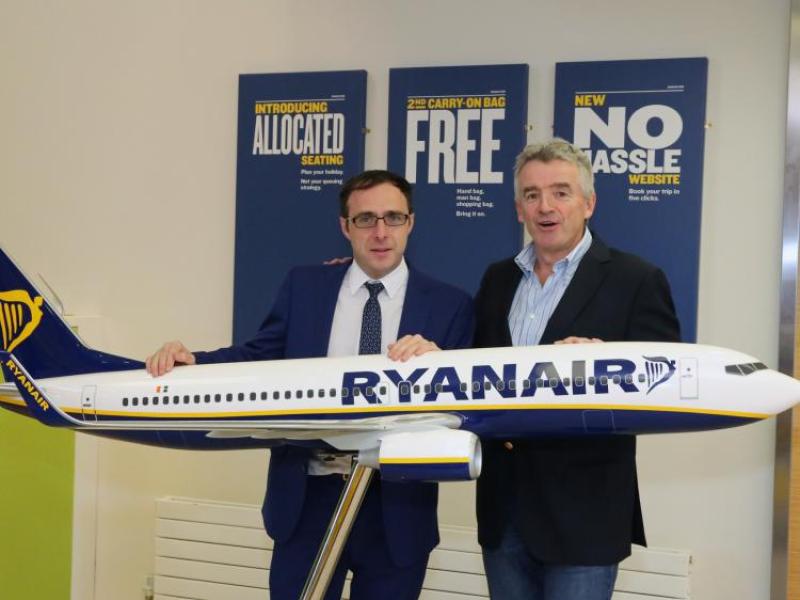 Fianna Fáil Spokesperson on Transport Robert Troy TD has said he is disappointed following the revelation that Ryanair is set to cancel up to 400,000 bookings between November and March.

Deputy Troy urged Ryanair CEO Michael O’Leary to accept an invitation extended to him to address the Oireachtas Transport Committee next week.

Deputy Troy said, “The news that Ryanair is to cancel an additional 400,000 bookings in the coming months is extremely worrying. This comes on top of the 400,000 bookings between September and October which were cancelled at short notice. Ryanair has made a tremendous contribution to the aviation industry down through the years, but it’s disappointing that passengers have been left discommoded as a result of the current rostering difficulties facing the company.

“Ryanair have committed to ensuring all passengers affected by the cancellations are adequately compensated. The Commission for Aviation Regulation needs to ensure that Ryanair follows through on this commitment. People cannot be left out of pocket as a result of cancellations which are outside of their control.

“It’s worrying that Ryanair has announced these additional cancellations considering it’s CEO Michael O’Leary stated at a press conference last week that it was on top of the situation and that further disruption was unlikely. People are understandably concerned that further cancellations could be on the way considering the manner in which Ryanair have handled this issue to date.

“I urge Michael O’Leary to take up the invitation that has been issued to him to attend the Oireachtas Transport Committee. While he is under no obligation to attend the committee, it would nonetheless be the right thing to do. Ryanair passengers want assurances that this issue is being dealt with appropriately and the Oireachtas Transport Committee offers Mr O’Leary a forum in which to address these concerns.”