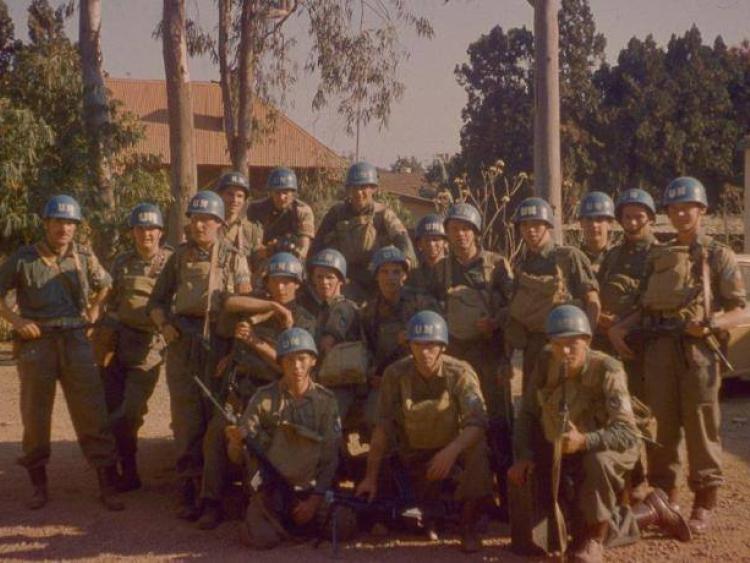 Comdt. Pat Quinlan, far left, poses with soldiers of A Company, 35th Infantry Battalion, in Elisabethville, before the Siege of Jadotville.

Longford/Westmeath Fine Gael Senator, Gabrielle McFadden has urged Minister Paul Kehoe and the Department of Defence to ensure that medals for those who were involved in the Siege of Jadotville are presented as soon as possible.

Senator McFadden has consistently kept Jadotville on the agenda since becoming a member of the Oireachtas and, speaking in the Seanad on Tuesday, she again thanked the Minister for the decision to present the men with individual medals.

“It is long overdue and I’m very glad that it is happening”, said Senator McFadden, and given how long they had to wait already and of their advancing years, she called on the Department to rush the medals through.

“There’s a special day planned in Athlone in October where there will be a series of events to mark the Siege of Jadotville, including the unveiling of a plaque in the Civic Square and it would be very appropriate if these medals could be presented that weekend.”

“There will be people travelling from Canada, the U.S. and from Britain for this weekend,” and she called on the Department “to do all that they can to provide these medals so that the presentation ceremony can take place on the same weekend.”

You may also be interested in reading: Longford Siege of Jadotville veteran Michael Tighe presented with special award