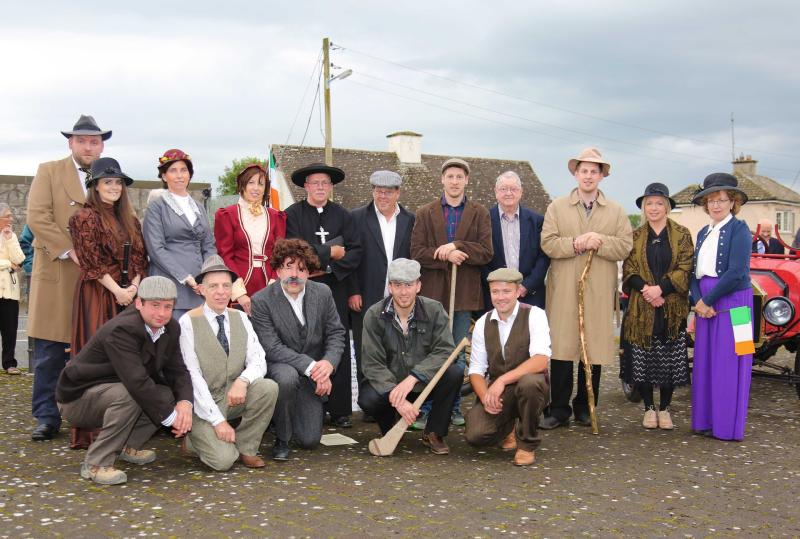 Ballinalee Players re-enact the famous speech given by Thomas Ashe in Ballinalee in 1917 at a commemoration earlier in the year. Photo: Shelly Corcoran

A ceremony to commemorate the centenary of the death of Thomas Ashe takes place next Sunday, September 24 at 3pm in Ballinalee.

Comóradh Céad Bliain Thomas Ashe is being organised by Republican Sinn Féin and among the guest speakers on the day will be Padraig Garvey from Kerry. Assembly is from 2.30pm on the Aughnacliffe Road in Ballinalee.

Father James J Sheridan, in letters, refers to his first meeting with Thomas Ashe in Granard: “There I first met Thomas Ashe who a short time later would ‘carry his cross for Ireland’ through the long martyrdom of a hunger strike. And with him was Michael Collins valiant soldier and fighting man who through a thousand dangers led his people to victory.

One of the most courageous leaders ever produced by a valiant race.

His death is among the greatest tragedies of our history.

And Jim Brady of Ballinamuck, John Dixon, Matt Brady, Charlie Reynolds, Sean Duffy, Sean Connolly and Sean McKeon.
It was the first gathering of Irish Ireland in Longford and funeral drums of 1916 were still echoing.”

Following the Easter Rising, Ashe was court martialed and sentenced to death.

Both he and prominent leaders were due to be shot the same day, but their sentence was commuted to life imprisonment after the British Government bowed to mounting pressure.

Ashe was fully prepared for death and would later describe this time waiting as a beautiful experience.

During these days he penned the famous and as it turns out to be prophetic poem 'Let me carry your cross for Ireland Lord'.

In June 1917 the British Government commuted the sentence of all those still in prison after the Rising.

Ashe was released in time for the Casement anniversary celebrations.

He was rearrested for a speech he made in Ballinalee, Co Longford and sentenced to two years.

He immediately went on hunger strike on Thursday, September 20 having been denied a bed, bedding and boots.

The British authorities murdered him by forcibly feeding him which resulted in a brutal death on Tuesday, September 25.

His last words to his comrades in Mountjoy before his death were to pray to Bishop O'Dwyer and to the dead who died for Ireland.

As he breathed his last breath he said: “we have put up a great fight”.

Republicans from throughout Ireland attended the funeral.

‘The first Battalion (Ballinalee) of the Longford Volunteers including Matt Brady of the Colmcille company marched eight miles to Longford Town to catch a special train to Dublin. There were so many passengers that extra carriages were added as the train progressed. The funeral, an open display of contempt for the powers of authorities brought the city to a standstill.

‘After a volley of shots was fired over the coffin, the oration was given by Mick Collins. He was brief but powerful: nothing additional remains to be said. The volley which we have just heard is the only speech which is proper to make above the graves of dead fenians.’