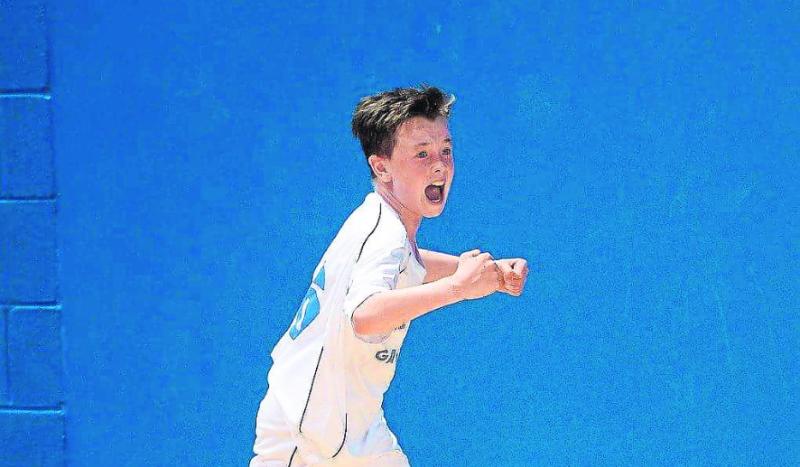 Joshua Kelly, from Kenagh, celebrates scoring a goal during their U-13 Boys Indoor Soccer match against Erne Valley at the Aldi Community Games August Festival. Photo by Cody Glenn/Sportsfile

In 2017, they won both the Longford Community Games U13 indoor soccer and Futsal competitions as well as receiving Leinster silver medals in Fustal and becoming Leinster champions in indoor soccer.

They won a hard fought All-Ireland semi-final against the Connacht champions from Riverstown, Sligo, and the final ended all square at 5-5 with Erne Valley of Cavan, the Ulster Champions. Unfortunately, however they were beaten one-nil, which turned out to be the last play of the game, in extra time in the final.

The management team would like to thank all the players and their parents for their dedication and commitment throughout the year and they look forward to working with them again in 2018.

Also, a special word of thanks to all the supporters from Kenagh who travelled to the match on the bus which was kindly sponsored by Farrelly’s Coaches and expertly driven by Michael Gill. Without a shadow of a doubt they were the best and most vocal supporters on the day and the scenes after the final when they clapped the boys out of the arena will long be remembered by all.

Thanks to the many individuals who supported the fundraising activities which covered all the expenses and the provision of new gear and in particular to Tess and Brian Doyle who sponsored the team kit. D’s catering for the tops and all other sponsors, Danny Walsh, Brian Fallon and many more.

Finally, the mementos which the parents organised for the coaches were very much appreciated and will ensure many happy memories!

Roll on 2018 and dare to dream of even more success.