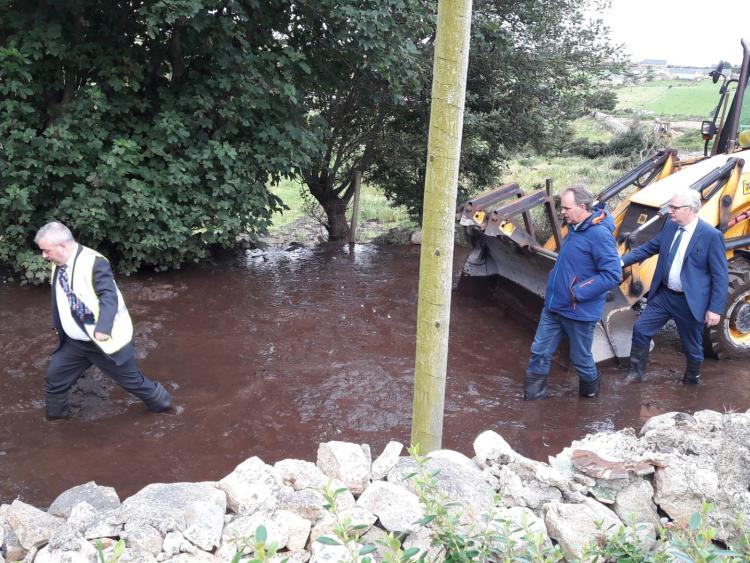 Minister of State for the OPW and Longford/Westmeath TD, Kevin ‘Boxer’ Moran visiting the scene of flooding devastation at Urris, Donegal.

It is time for Government to consider a dedicated Agency for Emergency Situations similar to many other European countries, Minister of State for the OPW and Flood Relief, Kevin ‘Boxer’ Moran has said, in light of the unprecedented flooding in parts of Donegal earlier in the week.

Minister Moran said the State response to catastrophic events such as major flooding emergencies needs to be handled and coordinated by a single agency within a Government Department.

“By having a dedicated Agency for Emergency Agencies, the help can be on the ground within hours,” said Minister Moran. “This is particularly important where houses have become uninhabitable and people need help urgently.”

Flood affected homes and businesses should not be blacklisted by insurance companies. @opwireland @IndepAlliance pic.twitter.com/xjMKZRxj6a

“The Government agency would oversee emergency services and protect people during natural disasters. It’s primary aim would be to provide a rapid response in the case of emergencies.”

“The agency would consist of all the relevant organisations including Gardai, Defence Forces, Civil Defence, the HSE and the various Government Departments.”

“The Agency would meet on a regular basis with the aim of assessing mission readiness for major emergencies,” said Minister Moran.

Boxer in Donegal to witness devastation of flooding

“There is a huge wealth of experience and expertise within the Defence Forces and the Civil Defence, for example, in providing transport and infrastructure solutions for people trapped in flooded areas and we need to ensure that they are on the ground within hours of a major natural disaster.”

“It has become very clear to me in witnessing at first hand a number of major emergencies in recent years that it is no longer the best approach to leave all the responsibility on the shoulders of the local authorities. Managing a major catastrophe requires a great deal of outside help and intervention,” said Minister Moran.

“The loss of one’s home is a traumatic event, even for a few days, and this is why I believe a dedicated Agency whould be able to react immediately where people have been left homeless. Similarly, the farming community should be given immediate assistance, in rescuing stranded livestock and so on,” said Minister Moran.

Minister Moran also believes that the giving out of financial aid to distressed families must be distributed in a rapid response fashion. “A dedicated Agency would have the personnel to get on the ground in the immediate aftermath of a major event which would be reassuring to those in dire need of help.”