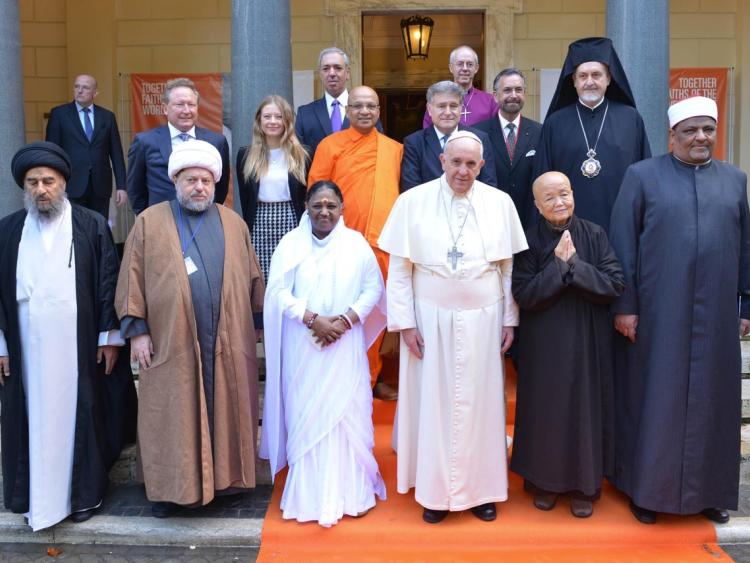 The leaders of several faiths pictured at the signing of a declaration in 2014 to eradicate modern world slavery by 2020.

Disagreements can break out, when people talk about the meaning of life, or God, or any supposed higher power beyond the life lived on this earth.

Catholic, Church of Ireland, Protestant, Anglican, Muslim, Jew, Buddhist, ; the list goes on. Some faiths take it more personal and seriously than others. Those who profess Allah as their God, are probably more passionately focused on their faith than others, but again, this is very subjective.

The way people express and interpret their faith is very dependent on background, location, and social habits.

Protestants, Catholics and Church of Ireland have, in reality, little separating them from each other.

Their faith is based primarily on the same gospels as we all know them, and that’s no wonder, since originally it could be claimed that they were all the same until some King or other in the UK decided that he needed a new faith to allow him to have more than one wife.

It’s difficult to always believe without questioning in something mysterious, when that something is not clear and scientific. Especially in the modern world where to believe without hard evidence and proof is not accepted as possible or plausible, and tends to be scoffed at.

Not much can happen without consulting the web/internet, or some other such modern creation.

One has to believe in science, yet one has to ignore certain claims - since that’s all they are - made in the name of science.
Regularly, we see some aspect of science discovering what was claimed in the past is entirely revoked in favour of a new discovery.

I believe that all faiths answer to, and pray to, the same God.

Some find it hard to accept this at times, partly because being humans they like to think that they’re the ones who have ownership of the ‘real’ God.

Many would claim that the Jews are the closest to having any sense of ownership of the real Christ.

They of course were blamed for the killing of Jesus.

Anti-semitism arose from the belief that Jews killed Jesus, and as such couldn't possibly be the real faith.

The book of Genesis (meaning origins) reveals that quite soon after the creation of humans, trouble begins. Several generations later, God decides to destroy humanity entirely from the earth, sparing only Noah and his family. We all know the story of Noah.

The construction of the Tower of Babel proved once again, beyond doubt that humans would always succumb to the lure of lavishness and the preoccupation of reaching ever higher for power.

Maybe that was one of the inspirations causing the Twin Towers to be attacked with such venom, in New York.

Closer to home the troubles in the North could have been said to have been triggered by religious differences.

Religion is widely written about, and we have to take the Bible as the record of truth, albeit written by men and all their flaws. There are some accounts that would cause anyone to question God’s or Christ’s understanding, or forgiveness, and it is in places quite brutal, but this is something one cannot, perhaps, avoid.

Obviously if someone doesn’t believe in the accuracy of the Bible, then that’s fair enough, not for me to comment upon. Who knows, maybe the Bible is some outrageous complex creation of early man…..

However, it is hard to deny the facts as presented in many scriptures, from diverse faiths, with several different accounts.
Of course, if you choose to base your beliefs on the administration of different churches, then you’re destined to be a cynic and an atheist.

One has to remember, that administrators are not ‘the Church’, or ‘The Mosque, or the Synagogue etc.

However, for me personally, I find it definitive and peaceful to believe, without reservation, without seeking precise affirmation of that which is a mystery.

I myself believe in the spirituality of Christ, his existence, and Calvary. His death and resurrection. For me, these things are too carefully recorded, albeit in different ways, to really deny.

I do not claim any special knowledge, just the same as everyone, believe or not.

Some who don’t believe are content with that; but those who do are happier believing, and live life maybe more devoutly, though maybe not.

But as an old lady, not a Catholic but a devout Orange Protestant who relatively recently on her deathbed, when asked about the afterlife said, “well if there is life after death won’t it be great, and if there isn’t, it doesn’t matter.”