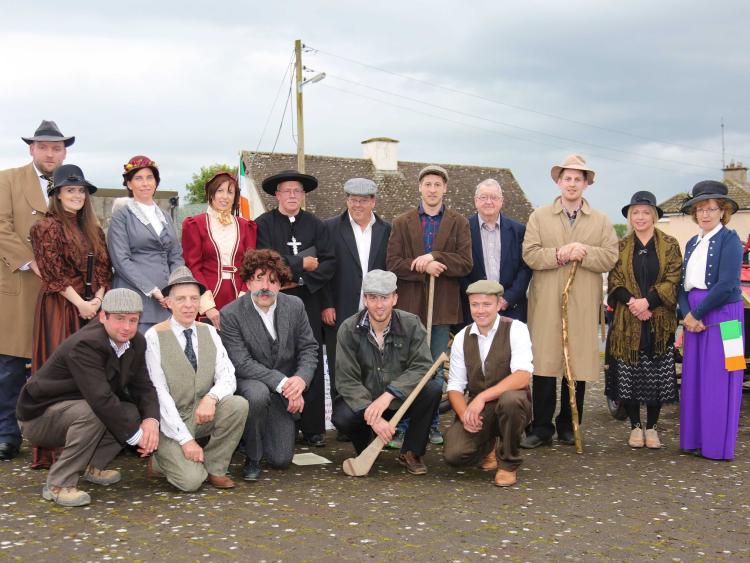 Ballinalee Players re-enact the famous speech given by Thomas Ashe in Ballinalee in 1917 Photos: Shelly Corcoran

The late Thomas Ashe was commemorated with dignity and pride in Ballinalee over the weekend.

And, this week as the 100th anniversary of the revolutionary’s death is commemorated and the centenary of his presence in north Longford marked, it was fitting that last Saturday’s events coincided with his famous speech, orated in Ballinalee on July 22, 2017.

Ashe was described by David Leahy - whose family are closely connected to Ballinalee - during a lecture at the Thomas Ashe Hall in the village on Saturday afternoon, as a “national school teacher, a member of the Gaelic League and Irish Volunteers, the hero of Ashbourne, President of the Irish Republican Brotherhood, the hunger striker, poet and patriot”.

“All of these events,” said Mr Leahy can be tracked back to the time that Thomas Ashe was here in Ballinalee and in Granard.

“He inspired many with his words, his deeds, his ideals and he certainly lived up to the Ashe family motto - ‘Not For Ourselves, But For All’.”

Earlier in the day, General Sean MacEoin’s forge was opened up to the public after recent renovations at the site and, later that evening, Ashe’s grandnephew Padraig, spoke to those gathered after a brief ceremony in which the tri-colour was raised and the Ballinalee Players re-enacted the events of that famous speech 100 years ago today.

Thomas Ashe's’ famous poem ‘Let Me Carry Your Cross for Ireland Lord’ was also recited on a number of occasions throughout the day.

Meanwhile, Mr Ashe said that he and his family were incredibly proud of Thomas Ashe’s achievements in the fight for Irish independence.

“He achieved so much in his short 32 years,” added Mr Ashe.

“He was a school teacher, storyteller, musician, a gaelgoir, a scholar, a painter, poet and military man - a remarkable man really.”

He said that the late Thomas Ashe was held in very high regard and held a deep respect for the nation’s history and culture.

“He was a man who stuck to his principles and the love and respect that he had for the culture, his people and his country stood out.

“In the end, he paid the ultimate price for that, his death.”