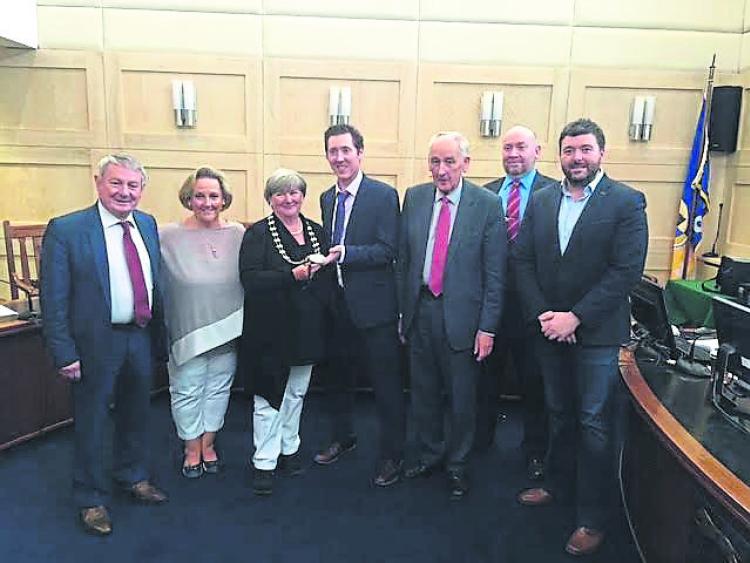 She may be no stranger to the Irish political scene but it was with humility and appreciation that Cllr Mae Sexton accepted her nomination as the new Cathaoirleach of Longford Municipal District following the AGM last Wednesday evening at Áras an Chontae.

A former Progressive Democrats (PD) TD for the constituency, Cllr Sexton re-entered the local political arena after she lost her Dáil seat following the General Election of 2007.

“The status of the municipal district of the county town deserves special recognition; when a county town is doing well, so too does the county,” she added.

“One thing we all have in common is that the citizens of Longford come first and it is an honour and a privilege for me to become Cathaoirleach.

“I know that we will all work well together and work in harmony.”

Cllr Sexton went on to say that as captain of the team, it was important to point out that the local authority was facing a very different year in 2017 to that of the previous one.

“We have a lot of plans to progress and then there are a lot of changes from a department perspective as well,” she continued, before pointing out that she was very aware that she and her colleagues would work well together.

Cllr Peggy Nolan (FG) was one of the first to wish Cllr Sexton well in her new role.

“It is great to see a woman in the chair,” she smiled, before adding that her counterpart was very experienced politically and the municipal district would be in safe hands under her chairmanship.

Head of Finance, Longford Co Council, John McKeon then added, “Cllr Sexton is tenacious, experienced, well informed and fair, and I am looking forward to working with her.”