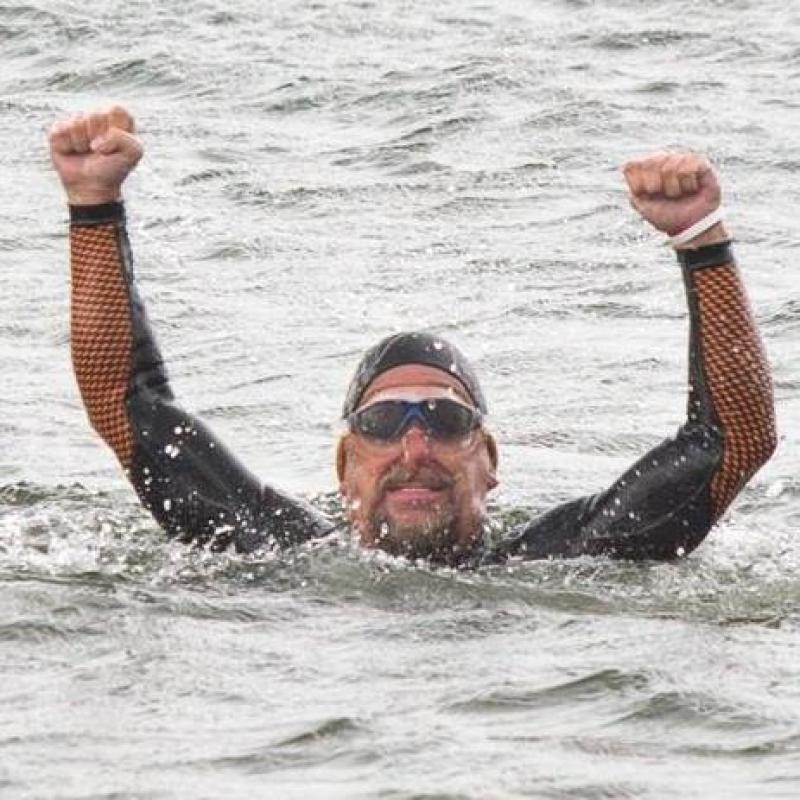 Cancer survivor Dean Hall plans to be the first person to swim the entire length of the River Shannon.

Cancer survivor Dean Hall from Oregon in the United States, plans to be the first person in history to swim the entire length of the River Shannon.

No stranger to long distance swimming, Dean became the first person to swim 184 miles of the Willamette River in his home state in 2014.

His message is one of healing and hope. Hall will also be raising awareness of  Childhood Cancer and hopes to raise funds for Childhood Cancer Foundation during this  20-stage swim which starts on Monday, June 5 on the northern shore of Lough Allen and finishes on June 27at Bishops Quay in Limerick.

Hall will be swimming, what is considered by Ironman triathletes as 2-3 marathon distances a day to complete this 150-mile swim.

At age 57, he believes that cancer recovery and life are much like marathon swimming.  “They are only restricted by the limitations we impose upon them”.

Maura Toner of Childhood Cancer Foundation (CCF) says that the charity is very thankful to Dean for choosing to dedicate this incredible endurance swim to raising awareness of childhood cancer.

Maura says “Childhood Cancer Foundation has been working hard over the last 4-5 years to help to improve the supports and services for children and their families who are living with cancer in Ireland.  Thanks to the generous support of people like Dean, we are funding  three projects on St John’s Paediatric Cancer Ward in Our Lady’s Children’s Hospital, Crumlin. These include, Play Services on St John’s paediatric cancer day unit, a medical research project in conjunction with UCD School of Nursing which investigates the benefits of complementary therapies for children in active treatment for cancer and  Beads of Courage which is an internationally recognised innovative arts in medicine supportive care programme in use in over 240 paediatric cancer hospitals in the US, the UK, Australia, New Zealand, Canada and other countries which is designed to help children to understand and cope with their cancer diagnosis.

"Dean will carry especially commissioned Beads of Courage on each stage of his River Shannon swim. Sharing his strength and courage, these beads will be gifted by Dean to children who face particularly difficult challenges during treatment.

"In January 2017, we started working on a Shared Care Hospital Project which aims to improve facilities and supports for children with cancer while hospitalised in isolation rooms in the country’s 16 shared care hospitals."

Maura added, “Our primary goal is to raise awareness of childhood cancer. Increased awareness will result in more funding to improve services for all children with cancer, their families and caregivers. We run the Light It Up Gold Campaign each September which sees important buildings and landmarks around Ireland light up gold as part of an international awareness campaign. We also advocated for children in the National Cancer Strategy 2016-2025 which will be published shortly."

If you would like to donate please visit www.childhoodcancer.ie or text GOLD to 50300.