Rise in fishing on Lanesboro's banks 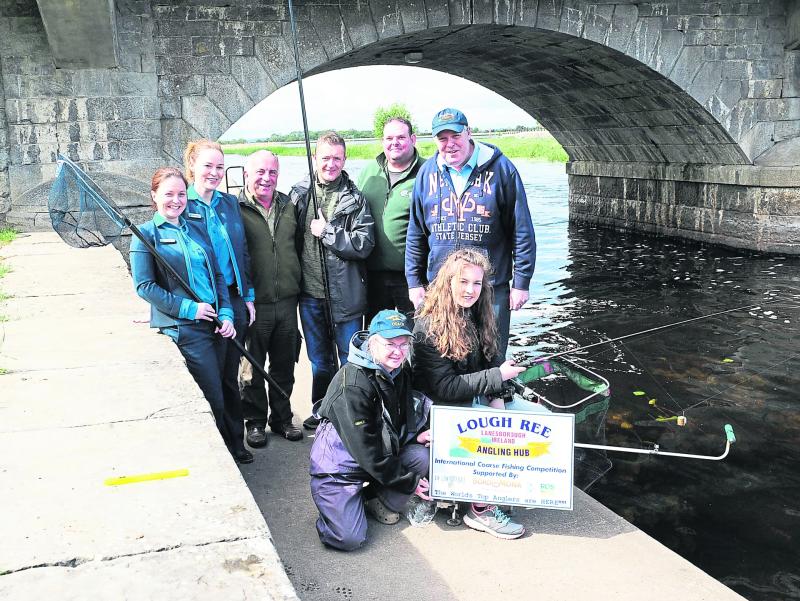 The waterways of Lanesboro and Ballyleague will be full of excitement over the June Bank Holiday as anglers from all over Europe prepare to land in Longford for one of the continent’s best international fishing competitions.

For the third year in succession, the event is being staged by the Lough Ree Angling Hub at the hot water stretch beside the ESB Lough Ree Power Station at Lanesboro on the Longford-Roscommon border.

“When we organised the first competition on the June bank holiday three years ago, we had to re-establish the reputation of our town and the local fisheries with the anglers of the world,” said Philip Gordon of the Lough Ree Angling Hub, who is also the Director of the festival.

“Coarse fishing was stronger here in the 80s and 90s, but we have now worked hard with Inland Fisheries Ireland (IFI) and have ensured that the fishing quality has now reached an exceptional level again.”

Adressing a crowd at the festival launch last week, Philip added that interest in the three-day event has grown immensely since it's establishment in 2015.

“The fishing last year was very good, with the result that this year, we didn’t even have to open the competition. On the invitation stage, we decided to invite back the members of the first two years and we filled the 42 places, with a waiting list of eight - so even if people dropped out, we’d still have the full 42.”

None of it would be possible, Philip explained, without the incredible support of the various groups and agencies that offer sponsorship.

“We coach schools probably on a weekly basis at this stage and it’s down to the sponsorship that we get that we can to do this,” said Philip.

As part of the festival launch, which took place on Friday May 19 last, a group of students from Lanesboro Community College took to the banks to catch a few fish.

“Usually, kids do other things under the bridge in Lanesboro - not fishing. And if you look at what they’re doing today, it’s remarkable,” said Fergal McElgunn, who accompanied the students from LCC.

“It’s a real privilege for us to get this sort of treatment. I was explaining to the kids this morning that to get this sort of professional tuition with all the gear provided, you could pay about a hundred euro a day each. And it’s costing them nothing.

“We’ve had great response from the girls in the school. Girls generally don’t get a chance to fish. They’re not encouraged as much as boys.”

The Lough Ree Coarse Fishing Festival will take place on June 2, 3 and 4 in Lanesboro and Ballyleague.

District Anglers with two days of world class fishing on June 24 and 25.

For details on either competition, contact Debbie on loughreeanglinghub@gmail-.com or call 043 33 21734.

“What we set out to do at the start was to recreate and to reinvent fishing here and anyone that’s passing by the banks here in recent months and indeed last year, will see that the banks here are being used an awful lot more than they were,” said Philip in conclusion.

“Any other town in any other country in Europe that has a lake as precious as Lough Ree and a river like the River Shannon would have utilised these facilities and made huge strides with them.

“Unfortunately they were forgotten about here in Lanesboro, but we’re starting now and we’re rehabilitating the whole thing.

“It’s great to see people getting behind us and anyone who has sponsored us for anything, thank you. Because this sort of thing can’t go on without that.”