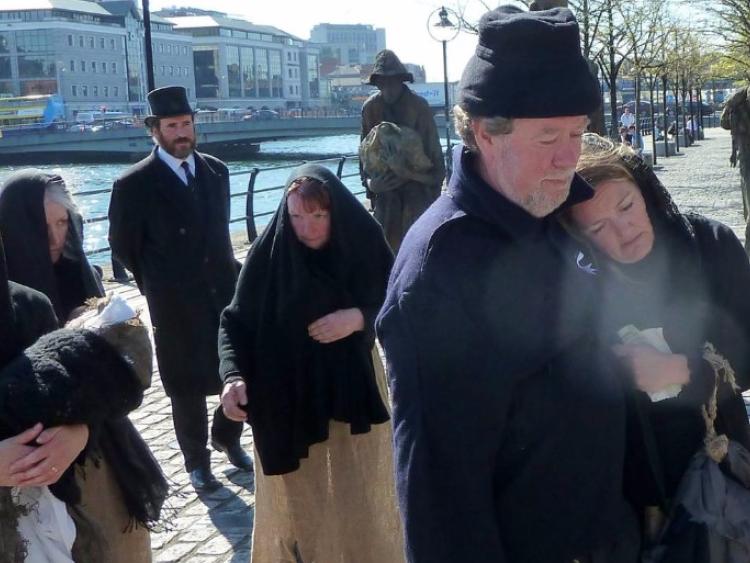 The National Famine Walk will pass through Longford on May 27.

An international group will follow in the footsteps of the tenants from Strokestown who were forced to emigrate to Canada during the summer of 1847.

The National Famine Walk will take place from Saturday May 27 to Thursday June 1, with President Michael D. Higgins greeting and sending them off at a commemorative event at Richmond Harbour, Clondra, Co Longford.

They will be walking along the Royal Canal in costume and invite people to join them for stretches of the route. The Famine walkers’ journey can be followed in real time at www.nationalfamineway.ie.

“Strokestown Famine walkers will embark on the six-day trek of 155km and blaze a new National Famine Way walking trail along the Royal Canal between Strokestown and Dublin, 170 years after the individual emigrants’ original journey,” said Caroilin Callery of Strokestown Park and the Irish National Famine Museum.

“We are inviting local people to join us for stretches of the journey,” she continued.

The event recreates the journey of 1,490 tenants from Denis Mahon’s estate at Strokestown Park, now the site of the Irish National Famine Museum (www.strokestownpark.ie).

Their journey took place in May 1847 or ‘Black 47’, one of the worst years of suffering of the Great Irish Famine. The tenants were escorted by Bailiff Robinson to Dublin to ensure they boarded ship and did not return home.

The story of the tenants’ fate after they left Dublin is a harrowing one. They travelled on open deck packet steamers to Liverpool and then crossed the Atlantic on some of the worst “coffin ships”:  Erin’s Queen, Naomi, The Virginius and The John Munn. Almost half of those who embarked died aboard ship or in the ‘fever sheds’ at Grosse Isle when they arrived in Quebec.

The group of walkers from the United States, Canada, Finland, Northern Ireland, and, of course, Strokestown will walk from Strokestown and Clondra all the way along the Royal Canal to Dublin and would like to meet with local people along the way.

They will build on the success of the 2015 Irish Famine Walk and help lay the foundation for a permanent National Famine Way walking trail.

“In walking in the footsteps of our missing Strokestown 1490,” said Callery, “we hope not only to recreate their journey but also honour their legacy.

"We want to find their living descendants in Canada and the United States, and invite them to join us on the National Famine Way.”

She also invited local people to “come join us, walk in their footsteps with us, share stories and engage with us as we pass through your area”.

Those who are interested in joining the walk can do so at 2pm in Clondra on Saturday May 27. The walk will make its way along the canal for 14km to Mosstown. It will then take off again at 11am on Sunday May 28 and head 19km towards Abbeyshrule.

Finally, at 9.30am on Monday May 29, the walkers will leave Abbeyshrule and walk for 27km to Mullingar. From there they will head to Longwood, Maynooth and then Dublin.

Follow the Famine Walkers in real time at www.nationalfamineway.ie