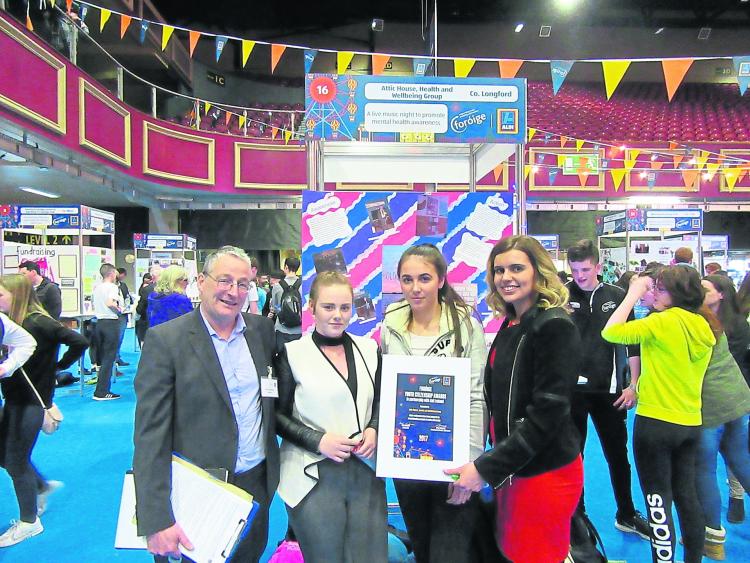 'HOPE' stands for 'hold on pain ends' and the girls believe that promoting positive messages is key in helping to encourage young people to talk about any mental health issues they may have.

The launch of the wristband took place last November and over 120 young people and parents attended the event in the Attic House.

The Attic House Health and Wellbeing group was one of six Longford projects at the Citizenship Awards.

Taking note from a recent event in their own community, this group of young people decided to take action and create a road safety awareness video with special emphasis on young drivers. By coming together to discuss the issue as members and then reaching out to potential reporters and outlets the group realised the positive potential for such a campaign and have expressed interest in continuing to interview more people, utilising the skills learned throughout the project like sensitivity interview preparation.

Over the last ten years the Longford Comhairle na nÓg lost three of their members to suicide. The group were approached by the Longford Youth Mental Health Initiative to adapt and edit a booklet, Myself, on mental health services that was created for another county to meet the needs of those in Longford. The group chose to divide the project into two teams: graphics and content and met with a representative from Mental Health Ireland to give feedback on their suggested changes.

These young people wanted to do something to promote positive mental health. The young people are going to erect a reflection bench to promote wellbeing amongst young people in the community. They felt this was a crucial issue locally and having surveyed young people in several schools discovered many did not know how to access mental health services so this information will also be displayed by the bench. They are still completing the project, however so far they have applied for permission from the Council and fundraised for the bench.

Longford Autism Foróige Club was established to give a place for those with autism to be themselves and to meet other young people with the condition. To show their pride at being part of something the group created a logo to represent them and help them to gain confidence. The group designed a logo to be placed outside the club to make people aware of their existence and to encourage others to join.

This group of young people, aged 13 plus, hosted a live music night to promote suicide awareness locally and the positive message “hold on, pain ends”. The club applied for and received a grant from the YouthBank to carry out the campaign and buy wristbands. They designed white wristbands with the slogan to give out at their event and made positive information boards with suicide awareness quotes.

There was a fabulous turnout and the performers went down a treat. The group learnt a huge amount about the issue of suicide and spread their message of hope throughout the local community.

The young people decided to create a short film to raise awareness about the issue of mental health. They were motivated to undertake the project because of the lack of support available to people. They researched the subject and spoke to experts in the area.

They scripted, edited and produced the film which outlines the burdens faced by people dealing with mental health problems. They said that the project has allowed them to learn a lot about the issue, and they feel that it has raised awareness within their community.