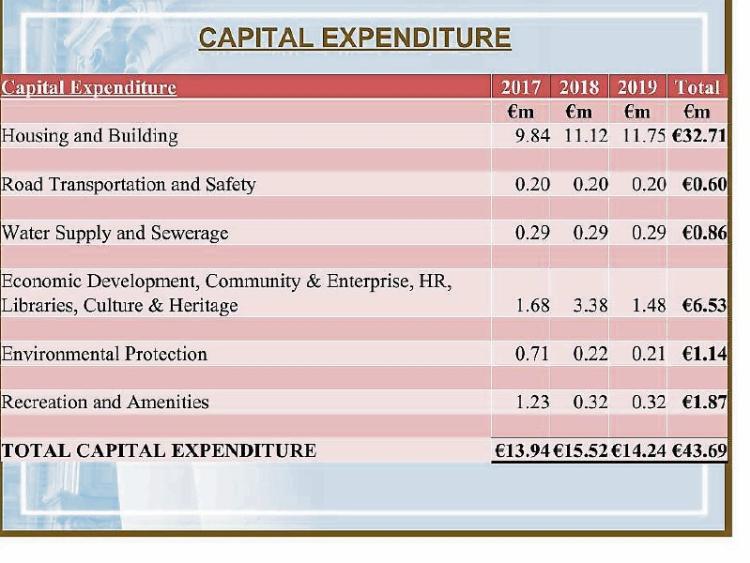 Longford County Council is planning to splash out more than €40m over the next three years as part of a major capital investment programme across the county.

Local authority chiefs have set aside close to €44m between now and 2019 in a move designed to illustrate growing confidence at both local and macro economic level.

More than two thirds of that total, or €32.7m, has been ring-fenced for housing and building projects.

The first evidence of that new-found exuberance reared its head last month with the onset of a €2.8m social housing development in Drumlish.

A further €15m is expected to be apportioned towards similar models in accordance with a government backed Social Housing Investment Programme (SHIP).

There are plans too for an increase in the provision of Older Person Dwellings, courtesy of a €4.3m investment.

Close to €4m, meanwhile, will be used on a string of regeneration projects akin to the likes of similar moves carried out on the St Michael’s Road area of Longford town back in 2013. Tackling the current supply of ‘voids’ or vacant houses on its books has also come in for specific attention with finance officials earmarking €3.2m over the next three years.

Among the many estates likely to reap the benefits of that seven figure sum include Longford town’s MacEoin Park estate.

That, according to the former Westmeath county councillor, was on top of almost €600,000 which had already been assigned to restore 15 vacant units at the estate.

Likewise, the Council has set its sights on improving the living standards of its tenants with disabilities with just over €3m being sanctioned under Mobility Aids Housing Grants (MAG) and Housing Adaptation Grants (HGD).

Around €6.5m covering the areas of ongoing regeneration plans detailing the town’s much vaunted ‘Northern Quarter’ are expected to take up €2.1m of those monies.

The long awaited arrival of a new library in Edgeworthstown also looks set to become a reality before the end of 2019 thanks to a €2.5m planned investment.

Plans to underpin Longford’s improving economic climate has likewise persuaded executive bosses to assign €750,000 for the development of business parks and €650,000 for a proposed digihub/incubation unit.

Efforts to improve the propensity for companies to set up operations in the midlands county follows striking comparable undertones that currently befall Longford’s re-emerging tourism industry.

Keen to take full advantage of those endeavours, council officials plan to spend €1.87 on recreation and amenity projects.

Approximately €1m is anticipated to go towards walkways and cycle trails with the remaining monies being divided between Corlea Trackway (€600,000) and playground developments (€120,000).

Honing in on Longford’s environmental defences is another subdivision that looks primed to take in over €1m before the end of the decade.

A €500,000 planned extension to Longford Fire Station together with €450,000 for landfill remedial works occupy the two top priorities for council senior figureheads.

Road, water and sewerage make up the remaining and combined €1.46m Longford County Council hopes to invest over the next three years.

Those plans, delivered by Head of Finance John McKeon, at a recent council meeting, were warmly endorsed by the vast majority of elected members.

However, Mr McKeon inserted a cautionary caveat with the admission that the plan remained “aspirational  in nature”.

This, he said, was largely owing to the reliance the Council was placing on drawing down close to €35m to finance it.