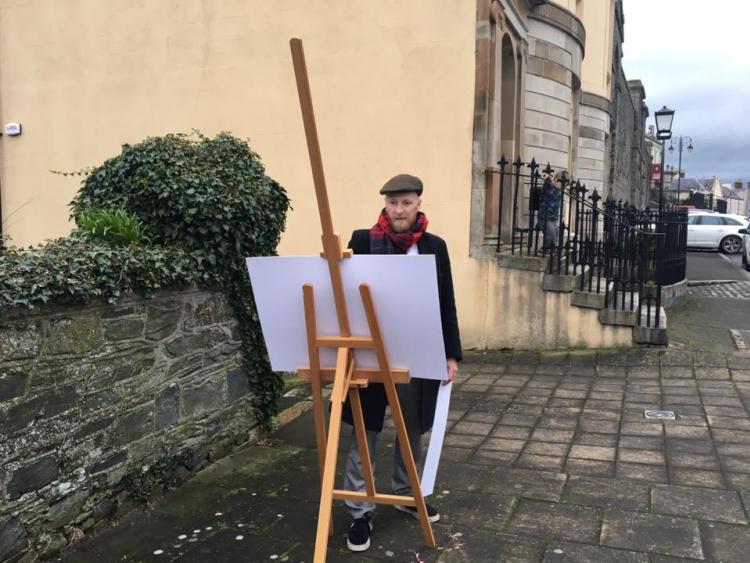 Artist Brian John Spencer is using social media, his art and writing to act as a window into Ireland as it is today and as part of his 'Ireland in 32 Days - A window into modern Ireland' project he is looking for a host in Longford to accommodate him this Thursday, March 30.

Brian John’s journey began on March 16 and it concludes on April 17. He is relying on the public to help with ideas and securing accommodation.
Earlier today he revealed that Longford was the only county where he hadn't yet secured over night accommodation. But in the past hour he was somewhet more hopeful. "Looks like I may have secured a host for longford, but to be confirmed."

If you can be of assistance, see Brian John’s twitter accounts @brianjohnspencr and @ireland_in_32 ; you can also read about his challenge on his Facebook page called Ireland in 32 Days. Alternatively, you can email him directly brianjohnspencr@gmail.com

Here is the background to Brian John’s project, in his own words ;

'Ireland in 32 Days - A window into modern Ireland'

On the back of my success in New York I am planning a 32 day and night tour of the island of Ireland, beginning on March 16 2016 in County Down and finishing on April 18 in County Dublin.

I will spend one day and one night in each county exploring the important issues that affect us - Brexit, identity, the centenaries, emigration, the border, power-sharing, and the future of the island.

I will use social media, my art and writing to act as a window into Ireland as it is today. I will do one landscape and one portrait a day, I will make daily videos and keep a detailed diary, later to be published as a book. Each night I will be hosted by one person/family/group/organisation/business, and I need your help to make this happen.

Read my full proposal here: Following successful travels in Ireland and America (and inspired by Brendan Behan, and the travel writing and art of JM Synge and Jack B Yeats) I propose to spend 32 days and nights travelling around Ireland, spending one day and one night in each county.

The 32-day adventure would itself be an act of art and reportage journalism. During the trip I propose to paint, draw, write, interview and make videos. I propose to spend each night with a volunteer family or business who would give me a bed, an evening meal and breakfast. I would repay them with a drawing of them and their house/landscape. I would also interview them and feature them in my book.

The overarching theme of the tour would be to look back on #Ireland2016. I would interview people on how they enjoyed and gained, or otherwise, from the crowning centenary year. I would also interview people on their views of the north and south, and how they see north-south relations. The outcome of the adventure would be multilayered. I propose to have an exhibition afterwards, a landscape and portrait painting from each county.

I propose to keep a diary of the entire trip as I did during my tour of America. I propose also to publish a book about my travels across Ireland like that published by Synge and Yeats. I propose to rely on the charity of my host families and businesses. I also propose to run a Kickstarter campaign ahead of the adventure to raise funds for expenses that will cover art materials as well as daily spending money. I also propose to twin with a media organisation.

There may be an opportunity to twin also with charity or organisation like Glencree or Corrymeela. I would propose to raise funds for the charity/organisation.

My ultimate goal is to be a window into Ireland, to promote a public understanding of modern Ireland, an insight into the island from Dublin to Derry, and from Dingle to Dunluce Castle.