Back to the future with Angus beef at Wilson's Hospital School 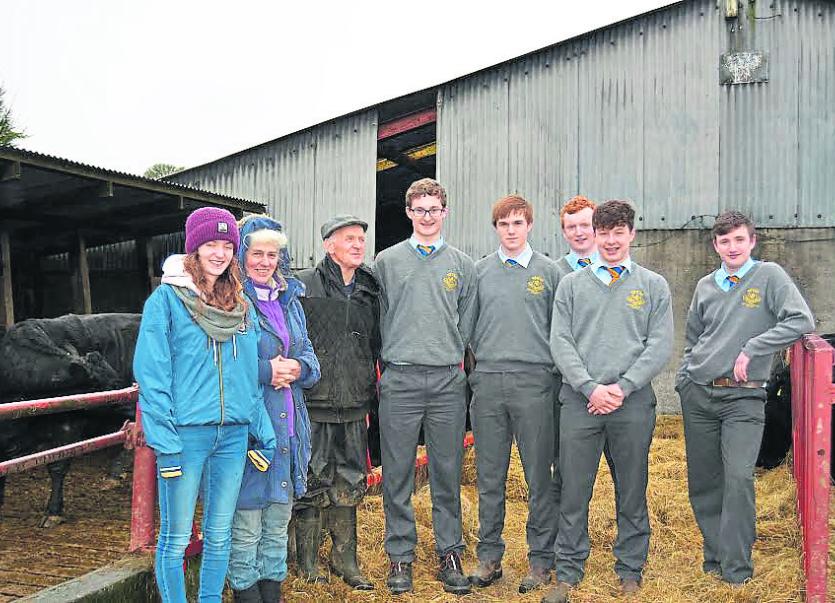 Three local lads in TY at Wilson’s Hospital School in Multyfarnham together with two other classmates have made it to the final of the 2017 Certified Irish Angus Beef School Competition.

Conor Craig, Coolarty; Derick Lloyd, Rathowen; Barry Sullivan, Streete; Alex Kenny, Navan and Evan Harris, Enfield will represent the school at the big finale in Croke Park on March 15 next,
The Irish Angus Producer Group, along with its processor partners, ABP Ireland and Kepak Group, devised the competition to increase awareness of Certified Irish Angus Beef among consumers and to further promote the benefits to farmers and their families.

The competition aims to encourage young second level students to become more involved in their family farms and to gain an understanding as to how beef produced on those farms is marketed in a way that represents the care and attention that has gone into the production and processing of their animals.

Stage one of the competition included a three minute video in which the local students explained the role of Ag Science within the school and their plans for the promotion of the Certified Irish Angus Beef brand if they win the competition, and the five calves that are up for grabs.

That was followed by a gruelling interview at the Mullingar Park Hotel in front of five judges where Conor added; “They asked us questions and challenged us as much as they could to see how much we knew”.

The lads obviously left a big impression because shortly afterwards they received word that they were one of just a handful of schools that made it to the final on March 15.

“We will have to present our work and will have a stand at Croke Park; we will have posters and tables and we will also play a video on the day as well,” continued Conor who then pointed out that the video would include footage from the farms the group visited and the interviews that they carried out.

They visited a dairy farm as well as Tom Armstrong’s suckler farm in Co Longford and they also spoke with the owner of a takeaway in Edgeworthstown who sells 100% certified Angus beef at his premises.

Cattle are kept on for slaughter on both farms in Longford and all are part of the Irish Angus Producer Group.

If the lads are lucky enough to win the competition, their plan is to keep the calves at their family farms.

They will be required to keep a diary that will include the amount of nuts consumed by each animal, weight gain etc and at the end, all the data will be compiled as part of research into the area.

The calves will be presented to the winning side on day three of the National Ploughing Championships which will be held next September.

Meanwhile, Ag Science teacher at Wilson’s Hospital School, Joe Scally explained how beneficial a competition such as this was to his students.

“We have students from Longford, Westmeath, Kildare and Offaly here, so there is a great interest in Ag Science at this school,” he added before pointing out that it was in fact a subject that was always over subscribed.

“We kept sheep here on the farm and the students looked after them and we have also kept pigs and hens in the past.

We have been involved in the practical end of farming for a number of years and it has been very beneficial to the students.”

Angus Beef is a niche market and the five lads need to try and market the produce and get as many people as possible to buy it, or to use Angus on their cows.

“This means less stress on the cows, farms can get their cows back into milk earlier and then they can keep them on if they have the grass or the feed for slaughter age,” continued Mr Scally.

“The aim of this really is to try and re-educate the consumer; in many ways it is like going back to the future because when I was the age the lads here are now, Angus and Hereford were the breeds in Ireland; it wasn’t until the country moved into the EU that we joined the bigger leagues.

“Angus are a hardier breed; no dehorning; more suitable to the Irish climate and they provide less stress on the farmer and on the land.”

For now though, it’s all systems go for the lads.

They only have a couple of days left to put the final touches to their project and come this Wednesday Croke Park will become - yet again - a hive of activity as the final of the 2017 Certified Irish Angus Beef School Competition heats up.