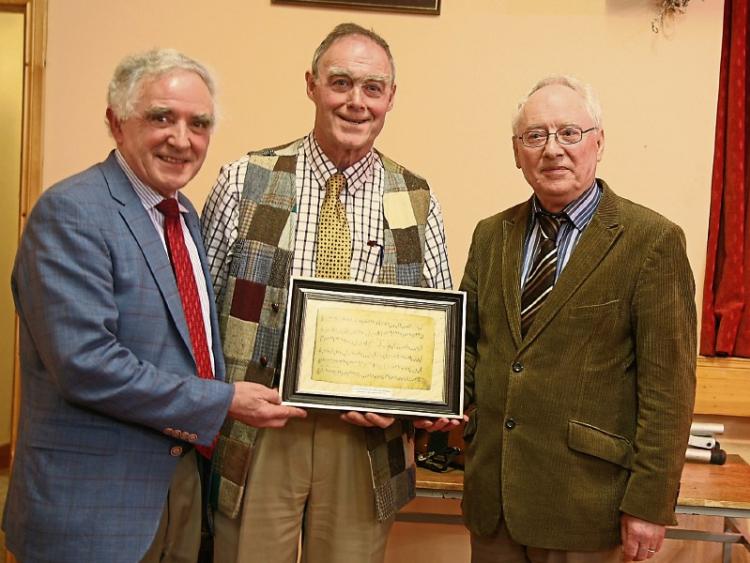 Renowned Mullahoran musician Antóin MacGabhann (Tony Smith) was presented with a framed copy from the original Reynolds Manuscript of the tune which he played, with his daughter Bernadette, when he launched Cumann Ceoil Chonmhaicne in Granard Library in August 2016.

The presentation was made, following a recent Apostolic concert, by Chairman of the Society, RTE presenter and authority on the Life and Ballads of Delia Murphy, Aidan O'Hara, in recognition both of Tony's contribution towards traditional music preservation and his generous sharing of his talents in its promotion.

The tune, "Towards up and towards down" was played as a duet with Bernadette.

The Reynolds Manuscript dates back to the late 1800's and Francis Reynolds, who emigrated to Des Moines in the early 1920's, provides a link through his uncle, who was also an important Manuscript source, with the famous fiddle teacher of the early 1800's, Blind Kiernan.

It was handed down through generations to Mary Hughes of Farragh, Killoe, and the tune was presented to Antoin as a ‘thank you’ gesture of appreciation of his generosity.

A poem, The Manuscript, about the music and the people who preserved it was read on the night by Dr Phil Brady, who has been a regular performer at the concert through the years.