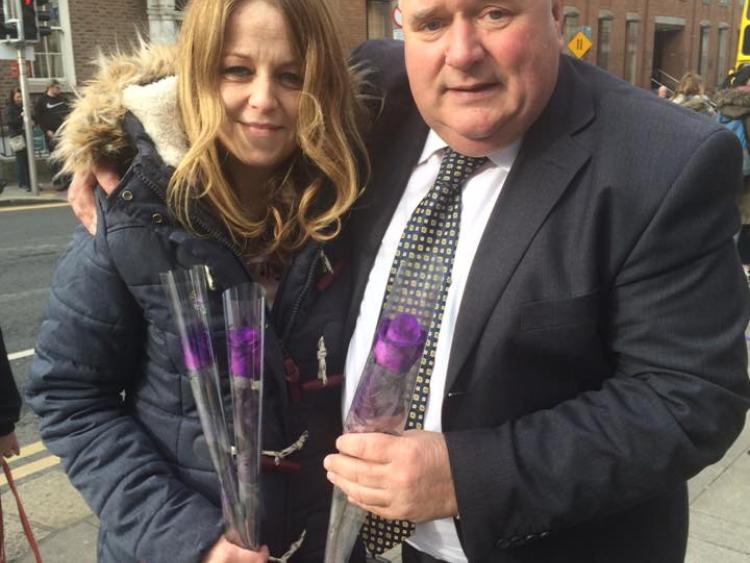 Fianna Fáil TD for Roscommon/Galway Eugene Murphy said that as a country with one of the highest rates of cystic fibrosis per head of population, Ireland should be at the forefront of new technologies and strategies to deal with the condition.

Deputy Murphy was speaking this week following his attendance at the second Orkambi protest at Leinster House which was organised by Longford native Jillian McNulty.

“I want to commend Jillian, a Longford woman, and indeed a former colleague of mine in Shannonside radio who has been a fantastic leader on this important issue. This was the second protest organised by Jillian McNulty outside Dáil Éireann. I was deeply moved by the plight of many young people at the protest, the tears of one girl who lost her beautiful sister almost a year ago, a poor young man in a wheelchair so weak that he is unable to walk much of the time and the tears of parents, brothers and sisters who have lost loved ones over the years. I am appealing to the Taoiseach Enda Kenny and Health Minister Simon Harris to sort this matter without further delay. I can tell you that the company involved (VERTEX) has substantially reduced its price but the Government for now are not for moving,” said Deputy Murphy.

“I was greatly pleased that so many of my colleagues in Fianna Fáil attended the protest as it really showed how serious we in Fianna Fáil are about getting this vital drug funded for the people who need it. I will most certainly continue to support this campaign and also support everyone involved and I would like to see Orkambi available as soon as possible,” said Deputy Murphy.

The Fianna Fáil Deputy pointed out that Ireland has one of the most severe strains of cystic fibrosis in the world and the highest incidences per head of population at three times the rate in the United States and the rest of the European Union, and in that context, Ireland should be at the forefront of new technologies, research and strategies to deal with the condition.

“Orkambi has been described as a game changer in the treatment of cystic fibrosis, that it can lengthen life, that it will improve quality of life and could effectively reduce the number of hospital admissions for cystic fibrosis patients by 40%. There have been numerous testimonies from patients about the life changing effect that Orkambi has had on them, and given the fact that cystic fibrosis is so prevalent in Ireland, it is drugs like this one that should be prioritised for funding.
Earlier this year the National Centre for Pharmacoeconomics recommended that Orkambi should not be funded “at submitted cost” though it recognises the health benefits provided by the drug.

Fianna Fáil immediately called for a review of this decision, especially given reports that the manufacturer of the drug is willing to enter into negotiations on price.  We will continue to raise this issue and press for a solution that benefits cystic fibrosis patients,” concluded Deputy Murphy.