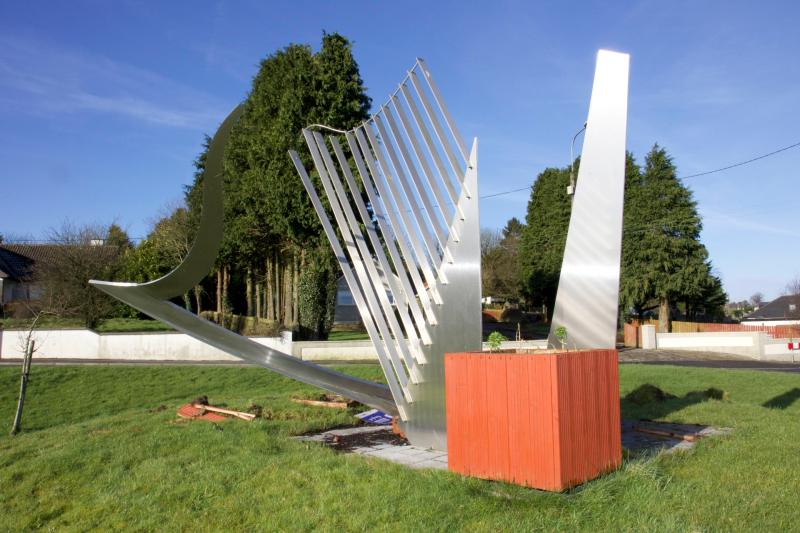 What remains of the Harp sculpture in Granard Photo: Michelle Ghee. www.gphotos.ie

The silver harp sculpture that was visible just outside the town of Granard on the Edgeworthstown road was destroyed recently after a van crashed into it.

The feature which depicts the north Longford town’s harp festival tradition was extensively damaged on January 13 last after the driver of a northern Irish courier company van skidded on ice close to the site and collided with the sculpture.

Speaking to the Leader, local area representative in the Granard Municipal District, Cllr PJ Reilly (FF) said the driver was en route back to Co Armagh when his van skidded, hit the harp and veered down the side onto the site of the near by local Fresh Today store.

“The guards were called and a full report in relation to the incident was provided to them,” added Cllr Reilly before pointing out that plans are already in place at Longford Co Council to have the feature replaced.

“The feature was made up of three separate pieces that created the illusion of a huge harp and at the moment just one of those pieces remains standing; the rest has been destroyed,” said Cllr Reilly.

The incident has been made all the more unsettling by virtue of the fact that just days before, Christmas works undertaken by the local authority in conjunction with Granard Tidy Towns, at the site had reached completion.

“The Council had secured flood lighting in the area and all the associated works in relation to that had been completed just before Christmas,” Cllr Reilly added.

“It was a very unfortunate incident, but thankfully work is underway to have the sculpture replaced.”
1781 saw the first ever Harp Festival take place in Granard.

The town’s ‘Market House’ built before 1691 was the scene of the old festivals which were initiated and funded by John Dungan, a native of Granard and wealthy businessman living in Copenhagen.

The aim of the festival was to revive public interest in the Irish Harp and Irish Harp Music. 200 years later in 1981 the people of Granard hosted a commemorative bi-centennial Harp Festival.

One of the ambitions of the committee responsible for the revival of the Granard Harp Festival was that Harp music would be brought into the modern world and the ancient tradition would not only be preserved, but would become the basis for further development.

All of this and much more was depicted by the Harp sculpture that was erected on the outskirts of the town in 2006.