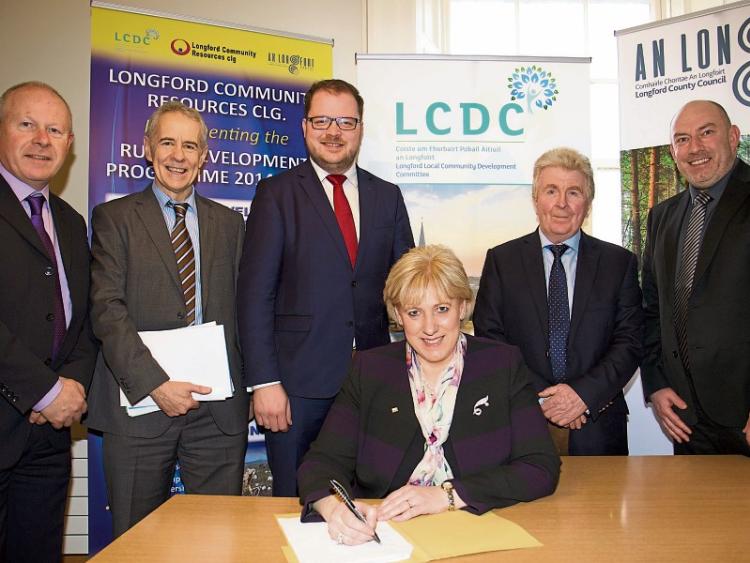 Ballymahon was the 'centre of the universe' on Monday last, as An Taoiseach Enda Kenny and Ministers Heather Humphreys, Denis Naughten, Sean Canney and Michael Ring descended on the south Longford town  for a very special launch.

'Realising our Rural Potential': The Action Plan for Rural Development was launched in a packed to capacity Ballymahon Library, where the excitement was palpable.

The plan contains 275 actions, based on five main pillars, which are as follows:  supporting sustainable communities; supporting enterprise and employment; maximising our rural tourism and recreation potential; fostering culture and creativity in rural communities and improving rural infrastructure and connectivity.

Cathaoirleach of Longford County Council, Cllr Mick Cahill, got proceedings off to a start by explaining that Ballymahon encompassed all the positives of rural life.

“We have  a great community spirit, a can-do attitude, pride of place and a warm, welcoming community.”

In welcoming the crowd to the launch, Cllr Cahill also invited those gathered to enjoy the hospitality of Ballymahon once more in July when the town hosts the Leinster Fleadh.

“We hope you all enjoy your visit here this morning and that you'll be back here on holidays shortly when we have Center Parcs Longford Forest up and running,” he added with a smile.

Speaking about his own experiences of rural Ireland, An Taoiseach Enda Kenny was keen to explain the possible benefits that rural towns and villages will gain from the plan.

“There's something in this programme for everybody,” he said, “and they're going to have to compete for it.

“It's not the government coming down and telling you what you must do, this is an opportunity for communities, for local authorities, for people, for villages, for parishes and for small towns to decide what they want to do and work together in their better interests.

“Whoever does come to Ballymahon in 25 years' times are going to see a thriving leisture complex with Center Parcs,” Mr Kenny later stated, going on to envisage the area when broadband has been rolled out to every home and business.

“They can sit wherever they are in Longford - be it Ardagh or Kenagh or Newtownforbes - and do their business in Tokyo and South America and anywhere else, because they'll be connected right to the very centre of the universe.

“And sure Ballymahon is the centre of the universe!”